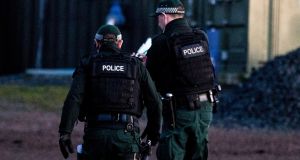 PSNI officers raiding a property as part of one of the investigation into money laundering operations in Northern Ireland. Photograph: PA

Seven people have been arrested and 15 properties searched in Northern Ireland as part of a police investigation into the international money laundering of criminal assets worth approximately £215 million (€253 million).

The Police Service of Northern Ireland (PSNI) said it was “the largest investigation into high-end international money laundering” ever carried out in the North and probably on the island of Ireland.

Det Chief Insp Ian Wilson told The Irish Times that the operation had cut off a “major avenue” for money laundering by organised crime gangs and would cause them “disruption”.

The majority of the money is believed to have come from criminal activity. This includes the sale of drugs, prostitution, human trafficking and fuel laundering carried out by organised gangs in Northern Ireland and the Republic of Ireland.

At this stage there is not believed to be any paramilitary involvement.

Documents and an amount of money were seized.

The woman and the 50- and 67-year-old men remained in police custody on Tuesday and were being questioned by detectives.

The remaining four men have been released on police bail.

More than 140 detectives and financial investigators were involved in the operation.

Det Chief Insp Wilson, who is the head of the PSNI’s Economic Crime Unit, said that during the 18-month investigation the police “identified that a significant volume of suspected criminal cash was being laundered out of the country through a number of shell companies and bank accounts”.

The investigation identified in excess of 50 companies and more than 140 bank accounts, the majority in Northern Ireland but with a small percentage in the Republic and Britain.

These shell companies were then used to launder the funds nationally and internationally, with money “filtered through these fake companies as if they were trading as a legitimate company, but of course there is no product to buy and no product to sell”, he said.

“In total, almost £215 million has been deposited to thousands of bank accounts across the UK and also transferred out of the UK through foreign exchange companies since 2011,” said Det Chief Insp Wilson.

“We believe today’s operation is one of the most significant live investigations into money laundering in the UK,” he added.

“Due to the size and complexity of this investigation, the operation involved PSNI liaison with Garda Economic Crime Bureau, Criminal Assets Bureau, National Crime Agency, United Kingdom Financial Investigation Unit and Her Majesty’s Revenue and Customs.

“International associations have been identified and PSNI are working with EuroPol and InterPol. We are also being assisted by money laundering experts co-ordinated by the National Economic Crime Centre.”

Det Chief Insp Wilson said “we believe we certainly have closed this facility down for them. This is very important, because if people aren’t able to launder the money they won’t be able to commit the crime because you need to have your money laundered to be able to get access to it and to use it. This will cause the organised crime gangs difficulties.”