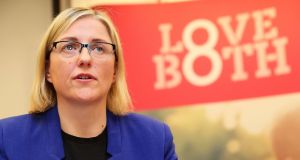 The second televised debate on the Eighth Amendment will take place on Tuesday on RTÉ One’s Prime Time.

The programme will include advocates on both sides arguing for and against a repeal of Article 40.3.3 of the Constitution.

Minister for Health Simon Harris and Prof Mary Higgins, who advocate a Yes vote, will debate Sinn Féin TD Peadar Tóibín and spokeswoman for the LoveBoth campaign Cora Sherlock, who are calling for a No vote.

The debate will last one hour and there will be a live studio audience of 90 people. Both sides of the campaign chose 45 people each to participate in the debate.

RTÉ sources said this would be a different format from the Claire Byrne Show, which came in for significant criticism from politicians favouring a Yes vote.

It will follow the style of a leaders debate, where each will make their opening pitch and answer questions from members of the audience.

TV3 is also due to hold a debate on Wednesday night at 10pm on The Pat Kenny Show.

It is understood there will also be audience participating and pre-recorded films from both sides setting out their arguments.

The first debate took place last week on RTÉ and resulted in numerous complaints from members of the public and indeed politicians.

The Minister for Health said the discussion developed into a football match with jeering, whooping, hollering, laughing and sniggering.

He called on both sides to make sure the discussion on Tuesday’s show is respectful and “more matching” to the sensitivities of the subject.

1 Coronavirus: What we know so far about how Ireland is affected
2 Woman (38) appears in court charged with murder of Garreth Kelly
3 Coronavirus: Ireland plans for massive increase in tests
4 What is coronavirus and what should I do if I have symptoms?
5 Dublin stabbing: Parking space was at centre of previous rows, gardaí told
Real news has value SUBSCRIBE