The Eighth Amendment puts the health of pregnant women in jeopardy

Voices from the Citizens’ Assembly: There is genuine moral uncertainty about abortion 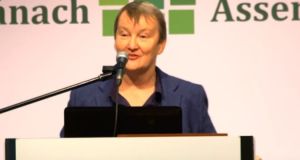 There are different and conflicting views regarding the reproductive rights of women and girls to make decisions about unplanned and unwanted pregnancy and our moral obligations to respect these decisions.

There are also different and conflicting views about the moral status of early human life and our moral duties to protect it.

In a society in which these different perspectives exist and come into conflict; what kinds of laws or public standards can be put in place which all morally sensitive, sincere and reasonable people could accept?

Two moral principles, autonomy and justice, are at the core of democratic societies around the world and these provide a basis for responding to this question.

Applied to reproduction, this understanding of autonomy implies that a woman or a man has the right to decide whether or not to try to have children with a willing partner, and when, and how many to have.

When it comes to reproductive decisions relating to unplanned and unwanted pregnancies, women and girls are uniquely and disproportionately burdened.

This is because pregnancy results in profound and irreversible physiological, psychological and emotional changes to a woman’s body, her sense of self and, indeed, the rest of her life.

The decisions she has to make about her pregnancy are not made in the abstract, but in the context of her personal circumstances. These circumstances may include, for example, responsibility for other children or dependant adults, being in a coercive relationship, having health concerns, money worries, or education and work commitments.

A central question is whether the State or anyone else has any basis for limiting a woman’s reproductive right to make these decisions which so intimately and directly impact on her life.

After all, like autonomy more generally, the principle of reproductive autonomy is not absolute because the choices someone makes may harm others who also have rights.

So we must ask: does terminating a pregnancy harm anyone? Some argue that fertilized eggs, embryos and foetuses are genetically unique human beings and that, as such, they have a right to life which justifies prohibiting women and girls from accessing abortion services.

In contrast, we hold the view that while early human life has moral value and deserves respect, fertilised eggs, embryos and foetuses (at least up to 18 weeks) are not sentient or self-aware, and as such they lack any interests of their own.

For this reason, our moral duties to protect them are not so compelling that they would justify overriding the rights and interests of the pregnant woman or girl.

In effect, this means that we trust women and girls to make their own reproductive decisions, not because they are especially wise or good, but because they are the ones best situated to weigh all of the relevant factors and risks involved and they are most impacted by the labour of pregnancy and childbirth.

The principle of reproductive justice obliges us to treat pregnant women and girls on an equal footing with other people: their rights should not be diminished because they are pregnant.

For example, we might all agree that a born child has a right to life, but it does not follow that this right to life means that he or she has the right to their mother’s or father’s bone marrow, kidney or even blood transfusion if the child needed any of these to survive.

We might think it morally praiseworthy of a parent to undergo surgery in order to try and ensure the survival of their child, but the State does not legally compel them to do so.

It follows that it is unjust to expect a pregnant woman or girl to undertake the special burden of continuing a pregnancy and enduring childbirth at the risk to her life, health or well-being in the interests of a very underdeveloped embryo or foetus when we demand far less of parents in relation to born children.

Over the past 50 years, the UK, our other European neighbours and the US have debated the rights and wrongs of abortion, but they have not reached a moral consensus about it.

Instead, most of them have arrived at a political compromise that tries to meet at least some of the deeply-felt concerns of those who disagree about the ethical nature of the problem of abortion: they recognise the right of a pregnant woman to have a legal abortion in the early stages of pregnancy, but limit access to abortion thereafter.

Ireland has also engaged in divisive and bitter debates on abortion. However, the legislative outcome - the Eighth Amendment - is not a compromise.

It represents a highly contested and one-sided account of the moral standing of the embryo or foetus, and the operation of this view in legislation and clinical practice places the health, lives and wellbeing of pregnant women and girls in jeopardy.

In addition, it requires of them a self-sacrifice that is unreasonable and unjust. To repeal the Eighth Amendment, however, is to recognise that there is genuine moral uncertainty about abortion among sincere and reasonable people, and this means that we should hesitate before imposing our views on those with whom we disagree.

Repealing the Eighth Amendment will also mean that we can negotiate a political compromise that recognises the rights of pregnant women and girls to make a judgement in relation to the morally right thing to do in their circumstances while, at the same time, improving those circumstances so that pregnancy, childbirth and child-rearing can happen in a community that is safe, supportive and inclusive.

1 Ireland among countries urged to consider reinstating Covid-19 restrictions
2 ‘I’ve been sleeping with my girlfriend’s sister. I need help. What do I do?’
3 Irish Michelin two-star restaurant to sell kebabs and fries from takeaway trailer
4 Fintan O’Toole: Turning a blind eye to meat plants a very old habit
5 Sinn Féin apologises as member resigns over social media abuse
Real news has value SUBSCRIBE