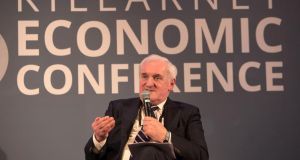 A second referendum on Brexit could be “a very dicey scene” and not the simple task some in Ireland appear to think, former taoiseach Bertie Ahern told an economic conference devoted to Brexit on Thursday.

Mr Ahern said his preferred approach would be one in which three options were quickly narrowed down from a larger field, and those final three negotiated upon.

Only then could British prime minister Theresa May go to Europe and look for an extension on article 50 with any hope of success.

“If you went over today and said can we have an article 50 extension, they probably would just tell you take a hike, and if they didn’t, they should,” he said.

Delivering the opening key-note address of the Killarney Economic Conference on Thursday, Mr Ahern said energy should be put into trying to get a consensus rather than continuing a stand-off position on a referendum.

“I have an open mind on a second vote. I have been in the UK too much last year to think that a second vote would be what some people here think would just be a simple task. I have done a lot of student debates in the UK. It’s a very dicey scene,” he said of a second vote.

Meanwhile, a prominent member of the Scottish parliament, Michael Russell, said a remarkable capacity for self-delusion in Britain had led many Brexiteers, including former chancellor Nigel Lawson who chaired the Leave campaign, to “cheerfully suggest that the solution to the Irish Border problem is for Ireland to leave the EU and rejoin the UK”.

Mr Russell said: “In other words, the solution to a problem created by them is to ensure that others simply implement the same crazy prescription that has led to the disaster.”

However, Ireland, as an independent state and member of the EU, remained in control of its destiny, and the EU had been “staunch in its defence of Ireland”, he said.

“Our own experience in Scotland as part of the United Kingdom has been very different. You have solidarity. We have been patronised, neglected and sometimes treated with outright hostility,” Mr Russell said.

The course of action now essential for Scotland, he believed, had been put to Mrs May after the vote on Tuesday night by Scottish first minister Nicola Sturgeon.

“Put briefly, there needs to be a unilateral ruling-out of any no deal agreed by parliament and the UK government.”

Then there needed to be either an election or a people’s vote, Mr Russell said.

“And as an election is now not going to take place, then a second referendum in which ‘remain in the EU’ is on the ballot paper is essential.”

For that to happen an extension of the article-50 timeline to at least the end of June would be necessary, Mr Russell said.

Independence for Scotland was firmly on the agenda, he also said.

The conference also heard that the rural economy and employer will “suffer most” from Brexit.

Mark Kennedy, managing partner for Mazars Ireland, said agri-food and tourism were at risk and the areas likely to suffer most.