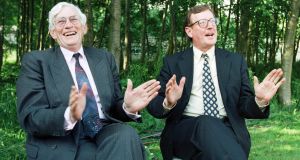 He walked into the room, an olive-green Donegal tweed light suit, pocket watch chain in the waistcoat, and held out his hand. “I’m Seamus,” he said, as my hand crunched with his handshake.

It was my introduction in May 1973 to Seamus Mallon as we, the newly elected SDLP members, gathered for the first time following the successful 1973 Assembly elections. I still see him , shoulders back as erect as an Armagh full-back was in those days. The pocket watch was handed down from his grandfather.

We would later stand shoulder-to-shoulder (what Seamus called “on the burning deck”) in the SDLP, refusing to dilute the Council of Ireland agreed at Sunningdale, in a last effort to save the first Sunningdale executive.

We were not against revisiting the Council of Ireland but, as Seamus said, “Not at the behest of bully boys on the street, damned if we will!” Moreover, it was our view that the ship had sailed, Harold Wilson’s government had abandoned us, and nothing could save that first power-sharing government at that point.

It was that determination that some mistook for stubbornness. Seamus combined diligence with tenacity, and his ability on detail helped secure the Belfast Agreement and, even more so, the exacting transformation of policing from RUC to PSNI.

In a lighter vein, an example of detail mattering, was an early trip with David Trimble as first and deputy first minister to meet French president Jacques Chirac at the Élysée Palace in Paris.

The Good Friday agreement, parity of esteem et al! It resulted in a stand-off with the first minister’s office for a day to two. Eventually they relented, and Ireland’s ambassador, Patrick O’Connor (an old friend of Seamus’s), laid on a splendid occasion at the Irish Embassy on Avenue Foch.

Next evening, the invitation was to the British Embassy for dinner with senior French journalists and academics with a knowledge of Ireland and the peace process. We were greeted in the hallway by the British ambassador, Michael Jay, together with a small, elderly lady.

The lady, the ambassador’s mother, immediately stepped forward and, reaching up, wrapped her arms around Seamus, telling him how much she admired him, while the ambassador greeted David Trimble. Slightly admonishing his mother, the ambassador more or less said, “Mother, that’s enough, run along,” as she told Seamus of her Irish ancestry, and that she still had her Irish passport.

Turning to her son, she added: “And if I’m ever in a tight corner, it will get me out, when yours won’t! Isn’t that so, Seamus?” It was a lovely moment, and the sweet irony of the greeting in the British Embassy was richly enjoyed by Seamus.

Mark Durkan has said that Seamus’s smoking oddly played a real part in breaking down barriers with unionists, particularly loyalists. When they would break from talks for a smoke, Mallon would be together with the other smokers like David Ervine and Hugh Smyth, and they saw a different warm, chatty, witty Seamus from the formal Mallon stance in the talks.

Seamus Mallon was much more comfortable defending his thought-out, considered position than he was in articulating his deliberations in reaching it

The same was true of his punting. I recall the afternoon before going to the British Irish gathering at Oriel College Oxford in 1999, where a range of high-level interests meet annually with senior politicians to deliberate. The Patten report on policing had just been published.

Ervine, who was going to it, arrived into my office, next to Seamus’s, with the Racing Post and a request that we meet with Mallon for an early breakfast next day in the college to discuss horses. Ervine had faith in Seamus’s tips, and explained there was a back gate at the college, and “first left, second right, there is a wee bookies”.

He would arrange to place the bets. Seamus reckoned that the founders of the august college would be spinning in their graves at such punting activity, and enjoyed it all the more.

Seamus Mallon was much more comfortable defending his thought-out, considered position than he was in articulating his deliberations in reaching it. He would remind you from time to time that it was as a defender he played for Armagh.

He would never designate a position for John Hume other than “further up the field”. Like Cardinal Ó Fiaich, his fellow Armagh man, he had a penchant for using GAA football terminology.

Ahead of the showdown meetings on decommissioning or policing, going to other meetings he would say: “Remember this is only a club match!” Asked what he meant, he explained that too many good players missed out on All-Ireland finals, due to an injury in a club game a short time before.

He had the sharpest political antennae. The Labour Party conference in 1999, where himself and David Trimble were invited to speak as first and deputy first minister, was memorable for Mo Mowlam.

She was Northern secretary in the British cabinet and got a standing ovation that went on and on. “Mo’s goose is cooked,” Seamus said to me sotto voce as we sat in the auditorium. As the cameras and the audience focused on Mowlam, Mallon’s focus was on Tony Blair. Within weeks Mo was sidelined.

Most importantly, he was far and away the first to sense that the Irish government was moving to indulge Sinn Féin and the IRA on decommissioning post the Good Friday agreement.

Seamus enjoyed theatre and was particularly fond of Shakespeare and loved all of John B Keane’s works. His party pieces were by playwrights: the lively “Mike Glavin, you’re the man” from Sive, and – in complete contrast, and always sung with reverence – Brendan Behan’s The Laughing Boy.

In music his taste was less mainstream , preferring Dvorak and Vivaldi to the greater-known composers. He was a fine angler, preferring lake fishing, be it Mask or Corrib and occasionally Lough Sheelin with friends Kevin and Wally.

It was early in the last week I saw him for the last time. We shared a love of poetry; I think we both knew we were saying our goodbyes. My departing words were:

“Do not go gentle in to that good night . . . Rage, rage . . .” Not only did the frail but lucid Seamus finish the Dylan Thomas quotation with me, he gripped my hand and feebly said, “He wrote it for his father, you know,” and proceeded to recite the full last stanza: “And you, my father, there on the sad height/ Curse, bless, me now with your fierce tears, I pray/ Do not go gentle into that good night/ Rage , rage against the dying of the light.”

Still gripping my hand, less firm than that first Seamus handshake, as his grip on this world ebbed.