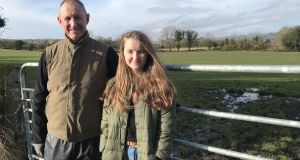 David Crockett and his daughter Rebecca on their farm at Coshquin, which straddles the border between Derry and Donegal: relaxed about Brexit.

For 3½ years, David Crockett has lived and worked on the frontier of Brexit.

The Border between Derry city and Bridgend, Co Donegal, runs right through his farm at Coshquin; the Crockett family has lived there through partition, customs checks and the Troubles.

Like many people along the Border, he had become used to the uncertainty of Brexit; “I’m sitting overlooking this Border, that’s become a big issue,” he says, gesturing towards the busy main road below. “All we know for certain is Brexit is going to happen in some way.”

Yet today he is as relaxed about Brexit as he has ever been. His 17-year-old daughter Rebecca chips in: “Anything that’s on the news now, he just says, ‘It’ll be alright’.”

“Because now we know,” Crockett explains. “The biggest danger was that it would be just leave, and there would be no agreement and a no-deal Brexit. That’s totally gone now. The EU will do a deal with Britain, and it’ll probably take years but Boris Johnson will go out at the end of January and they’ll work then behind the scenes to sort it out because it’s in everybody’s best interests.”

His greatest fear had been a hard border; the withdrawal agreement has averted this. “As long as I’m able to export throughout Ireland, ” he says. “With the size of my farm, I’m not exporting to England or anywhere else, but I’m so close, I’m back and forwards across that Border, I’ve been doing it all my life.”

A unionist – though he votes SDLP “because a unionist wouldn’t get in here” – Crockett voted to remain in the EU. He remarks that it was “great to see” the party leader, Colum Eastwood, elected as the city’s MP in December, less than two months after the prospect of a no-deal Brexit was averted; for him it was evidence of improving times.

“History sometimes repeats itself, and you were scared,” he says.

Crockett has long been ready for Brexit; he transferred tractors to the Republic side of the farm – and paid VAT on them – in time for the initial Brexit deadline in March. He quotes his grandfather’s description of partition, which split his farm in two: “He said it was the same [as Brexit], that until it actually happened nobody knew [what it would be like], and afterwards a lot of people said, ‘we didn’t think it was going to be like that’.

“We were better off in Europe than we were when we were out of it, and I’d say we’ll still be in it in Ireland, so I’m prepared for whatever comes now.”

Negotiations will take years, he believes; pragmatism and the reality of all-Ireland supply chains will lead to an ever-closer relationship between North and South and, eventually, to a united Ireland.

He would have no difficulty, he says, with a united Ireland; he believes concerns expressed by some members of the unionist community are unfounded.

Aged 14 at the time of the referendum, Rebecca was too young to vote; 3½ years on, she says, people have “definitely become more weary about it”, though she now feels “it’s now about getting the best option and reducing the casualties in what could be a turning point in history for Ireland and Northern Ireland and the UK.”

She attends an integrated school, where pupils of all backgrounds are educated together; Brexit, she says, has changed how people her age think about their identity.

“If I’m talking to friends who are nationalists, they might be talking about how there could be a hard border and what it would mean for people and there was a genuine fear. But when I would talk to unionist friends, they would have been of the opinion that Brexit was good.

To her, “it now seems impossible that we wouldn’t have a referendum” on a united Ireland; personally, she is unsure how she would vote.

“I would be scared it would be like Brexit 2.0 and people would go into it without knowing what it would mean.”

Her father agrees. “You’d have to get the discussions in place first or it’d be the same way everyone went into Brexit. Nobody had any idea.

“The big thing for me would be the National Health Service because I know what the difference is between the two [health] systems.”

Yet for the moment, there is a degree of certainty about the future. Crockett points from the farmhouse to the end of his lane; turn left for Donegal, and right for Derry.

For decades, he was unable to make that left turn; the road, which led directly over the Border, was blocked off by the British Army in the early 1970s. He is reassured, he says, that he does not have to worry what will happen come the morning of February 1st; he will still be able to take that left turn towards Donegal.

In school, the students are no longer talking about Brexit. The main issue now, says Rebecca, is the environment – “it’s the fires in Australia, the marches, Greta Thunberg.

“In the grand scheme of things, Brexit isn’t that big for our generation. Yes, it has a huge impact on the economy and jobs and everything, but none of that will have any effect on us if we have no planet to have jobs on.”