Schools’ use of reduced timetables will be curtailed by 2020 – Minister 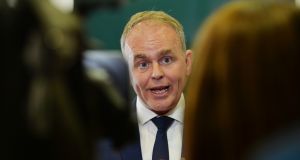 Minister for Education Joe McHugh: ‘I want to get something working for the new year.’ Photograph: Alan Betson

New guidelines to ensure that school pupils will only be subject to reduced timetables in exceptional cases should be in place by the beginning of 2020, Minister for Education Joe McHugh has promised.

Mr McHugh told the Oireachtas committee on education he would ensure new guidelines would be drafted in a tight time frame. “I want to get something working for the new year,” he said.

The committee, along with Technological University Dublin and Inclusion Ireland, uncovered practices in schools where one in four children with special needs were subject to reduced timetables. Some receive formal education for only a few hours each day. Traveller children have been especially affected.

The new rules propose that schools will have to notify the child-protection agency, Tusla, when putting a reduced timetable in place and explain why it is being used and show that consent of parents has been received.

Mr McHugh told the committee, chaired by Fiona O’Loughlin of Fianna Fáil, that children should be exempted from a full day at school only in exceptional circumstances.

“Reduced timetables are not in any way a standard aspect of a child’s experience of school and must not be allowed to become such. They are exceptional measures.

“While in some circumstances it may be necessary to use a reduced timetable, for example as a means of assisting the reintegration of a pupil to a school routine, such arrangements should only be put in place in limited and time-bound circumstances,” he said.

He said the guidelines would give clarity to schools about reporting on such reduced timetables. He said this would ensure they were limited only to “circumstances where it is absolutely necessary”.

The Minister argued that the number of special needs teachers and assistants has increased significantly.

Turning to the challenges for Traveller children, he pointed to a pilot programme aimed at attendance, retention and participation that would inform future strategy.

Fianna Fáil education spokesman Thomas Byrne highlighted the difficult circumstances facing Travellers and said all the agencies needed to play a role in ensuring that each child’s access to full education was implemented.

Catherine Martin, deputy leader of the Green Party, said she was not convinced that guidelines would ensure that the use of reduced timetables would be the exception rather than the norm.

Sinn Féin’s spokesman, Donnachadh Ó Laoghaire, said the mechanisms employed were being used and abused in a way to frustrate the children’s ability to get an education.

Jan O’Sullivan of the Labour Party pointed to a study in Limerick that showed that only a quarter of education welfare officers were aware that a child was on a reduced timetable.

Independent Senator Lynn Ruane said the issue needed to be looked at in a wider perspective. She said other factors came into play such a pupil-teacher ratios. She said that in large classes, one disruptive child became a problem to be removed so that the teacher could adequately teach the rest of the class. Reducing ratios and increasing capitation would help, she said.