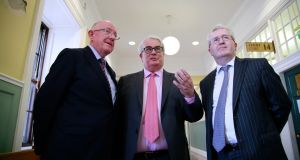 The process for selecting Séamus Woulfe to fill a Supreme Court vacancy differed from the normal procedure, according to the accounts of 10 former government figures.

A separate analysis of official records shows that Woulfe is only the second lawyer to have been appointed to the Supreme Court by way of the Judicial Appointments Advisory Board (JAAB) since it was established in 1995. In nearly all other cases the position went to a serving judge.

The Government has said it followed established practice when choosing Woulfe for the Supreme Court position on July 15th – two weeks after his term as attorney general had ended with the change of government. Taoiseach Micheál Martin and Green Party leader Eamon Ryan have confirmed they were not aware that at least three judges had expressed an interest in the position but said they were happy to nominate Woulfe, who had been recommended by JAAB.

Martin and Minister for Justice Helen McEntee have said the long-standing practice has been to bring only one name to Cabinet for judicial vacancies. They have not said who was consulted as part of the assessment of candidates, or how the assessment was carried out.

While McEntee was correct in saying only one recommended name is brought to Cabinet, sources with knowledge of the appointments process say, on a number of occasions the names of other applicants have been shared with Cabinet. “It would be surprising”, one former Cabinet member said of the Government’s position that the Taoiseach was not told of other candidates for the vacancy. “It dishonours the process if it’s a performative activity. It has no meaning as a process.”

“It’s not credible,” said another. A third individual, a former minister, said the only occasions on which there was no discussion of candidates was when there had been a political agreement in advance to appoint a specific individual. A fifth minister said “a certain weight” would have been attached to expressions of interest from within the judiciary.

The former Cabinet members’ accounts of the circumstances surrounding specific appointments were corroborated by a number of senior officials.

In a column in the Irish Daily Mail on Monday, the Fianna Fáil former minister for justice Dermot Ahern said: “It now seems that leading Fine Gael members pulled a fast one by rushing to fill the Supreme Court vacancy with their own former attorney general.

“Incoming Taoiseach Micheál Martin should have smelled a rat. He’s long enough around. But, maybe, he didn’t want to start a new government with a row over a judge.”

The standard letter from the JAAB to the Minister for Justice includes the names of recommended lawyers as well as those who applied but were not recommended. That letter was routinely shared with the offices of taoiseach, tánaiste and attorney general in previous administrations, according to several sources. A separate list of eligible judges, including those who had expressed interest in promotion, was also circulated, according to the same sources.

This evening President Michael D. Higgins appointed former AG Séamus Woulfe as a new Judge of the Supreme Court and wished him well in his new role. Taoiseach Micheál Martin was present at the ceremony, as was the current Attorney General, Paul Gallagher SC. pic.twitter.com/nnQBOxf3Bz

All 10 sources said the taoiseach and tánaiste of the day were closely involved in discussions on higher court vacancies.

Former minister for transport Shane Ross has said he was told of proposed judicial nominees in advance of Cabinet meetings. However, former ministers say that while different candidates’ names were on occasion shared within Cabinet in the Fine Gael/Labour coalition from 2011-2016, the flow of information to Cabinet slowed under the Fine Gael/Independents administration. Ministers contacted by The Irish Times attributed that both to a fear of leaks and broader tensions between Ross and his Fine Gael colleagues over appointments.

An exception was the discussion leading to the appointment of Frank Clarke as Chief Justice in 2017. On that occasion, according to two sources, all names under consideration where shared with Cabinet.

Defenders of the Government position have justified Woulfe’s nomination on the basis of a convention that each attorney general has first refusal on judicial positions. Two serving attorneys, Anthony Hederman and Cecil Lavery, have gone straight to the Supreme Court in the past 70 years, and in 2017 the then attorney Máire Whelan was appointed to the Court of Appeal.

A separate analysis of JAAB annual reports over a 20-year period indicates that Woulfe is only the second lawyer ever to have been appointed to the Supreme Court having gone through the JAAB.

Records show that 29 lawyers have applied for advertised positions on the Supreme Court since 1996, the year the JAAB began to operate. The board does not disclose how many of those applicants it recommended. Until this year, all those applicants had been unsuccessful except for Donal O’Donnell, who was appointed in 2010. Mr Justice O’Donnell was the leading constitutional lawyer in the country and had no links to any political party.

Adrian Hardiman, the only other lawyer to go directly from the Law Library of Ireland to the Supreme Court in the last two decades, did not apply through the JAAB. Governments have the discretion to appoint people who do not apply or formally express an interest in a position.

Together, the last two Fine Gael-led governments appointed six Supreme Court judges, all of whom were serving judges promoted from lower courts.

February 4th, 2020: Four days before the general election, Chief Justice Frank Clarke writes to the then minister for justice, Charlie Flanagan, asking that the vacancy on the court be filled.

February 17th: Flanagan writes to the Judicial Appointments Advisory Board (JAAB) to request a list of suitable candidates for the vacancy.

Around the same time, then attorney general Séamus Woulfe tells then taoiseach Leo Varadkar that he intends to put in an application for the vacancy. He tells Varadkar that this does not mean he is not happy to stay on as attorney; his preference, he says, is to stay on in his current position.

March 9th: The JAAB, which is chaired by Clarke, meets to consider applications for the position. Woulfe, who sits on the JAAB, recuses himself, as the legislation requires, because he himself has applied for the job. The board then sends Woulfe’s name to the Department of Justice.

June 12th: At one of its final meetings before leaving office, the Cabinet nominates Ms Justice Mary Irvine, a Supreme Court judge, to succeed Mr Justice Peter Kelly as president of the High Court. This means there are now two vacancies on the Supreme Court.

June 27th: The Fine Gael/Independents government leaves office and the new Fianna Fáil/Fine Gael/Green Party Coalition takes power. Woulfe is succeeded as attorney general by the barrister Paul Gallagher. Flanagan is replaced as Minister for Justice by Helen McEntee, who inherits the file on the Supreme Court vacancy. By this time, Taoiseach Micheál Martin has been told that Woulfe has been recommended by the JAAB.

Early-mid July: After a number of weeks in office, McEntee says, she looked at the JAAB recommendation and other expressions of interest in the position. She then spoke to Martin, Varadkar, Green Party leader Eamon Ryan and Gallagher. Martin and Ryan have said they were not aware of any expressions of interest from serving judges.

July 15th: McEntee brings a memo to Cabinet recommending Woulfe’s nomination for appointment to the Supreme Court. She says he has been recommended by the JAAB.