Inside Politics: Is there sexual harassment in Leinster House? 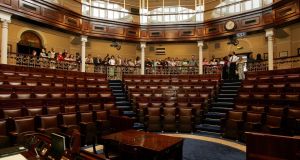 The podcast hears sexual harassment like that alleged to have taken place in Westminster does not happen in the houses of the Oireachtas. Photograph: Aidan Crawley/The Irish Times

The Houses of Parliament in Westminster have been engulfed by allegations of sexual harassment in the past week. How does the environment in Leinster House compare?

Fiach Kelly and Sarah Bardon from The Irish Times political team spend their working week in and around the Dáil.

On the latest Inside Politics podcast they tell Hugh Linehan that while it is an overwhelmingly male environment, there are a number of reasons why sexual harassment like that alleged to have taken place in Westminster does not happen in the houses of the Oireachtas.

Also on the podcast, the team talks about proposals to give additional powers to the Policing Authority, the intense lobbying around plans for the displaying of alcohol in shops and a Facebook post by Alan Shatter confirming he won’t stand for Fine Gael in the next general election.