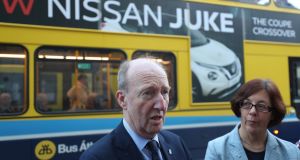 Minister for Transport Shane Ross with Anne Graham of the National Transport Authority as the launch of the ‘Just A Minute’ (JAM) card for public transport. Photograph: Nick Bradshaw

Minister for Transport Shane Ross has said he doesn’t believe there is a “plot of any sort” to derail his plans to introduce graduated speeding penalties.

Mr Ross said not a single minister or rural TD has approached him “on this issue at all”.

There have been reports that rural Fine Gael ministers are plotting to derail the plans which will come before Cabinet on Tuesday and that there could be “all-out war” at the meeting. The proposals would see new laws introduced allowing penalty points and fines to be applied based on how far above the speed limit a motorist is caught travelling.

“I don’t think there’s a plot of any sort. I think people are probably saying things which they are going to say in Cabinet tomorrow anyway,” Mr Ross told reporters on Monday.

“I don’t think there’s going to be a need for any sort of war, there might be a bit of discussion, I don’t anticipate war about it,” he added.

Mr Ross said he was sure political parties may have “reservations” about some of the details of the plans adding “I’d ask them to study what we have done since it originally came to Cabinet”.

“We changed it to take account of the difficulties, we’ve made it actually a little bit more lenient than it was initially,” he said.

Mr Ross said the Minister for Justice Charlie Flanagan had approved and is endorsing the proposals. The Independent TD said motorists going 30km/h over the speed limit have to be treated differently.

“We’ve got to recognise that the real danger is in that zone, to people’s lives. We’ve got to make absolutely sure that they realise there’s a difference as well,” he said.

“At the moment it looks a little bit too easy, there are too many speeding offences and people are getting away too easy, especially at the higher level.”

Mr Ross said the majority of people will find themselves in “the same or a better position”. The Minister was speaking at the launch of the Jam card, which allows people with a learning disability or a communication barrier to indicate discreetly that they might need ‘just a minute’ when accessing public transport.

Passengers with a learning disability, autism or any other communication barrier show the driver their Jam card to convey they might require a little more time and understanding.

Jam cards are available in the standard card form or as a smartphone app and are currently used by over 35,000 people in Northern Ireland and the UK on public transport, in shops, restaurants and other public spaces.