Senator says she has evolved since posting tweets eight years ago 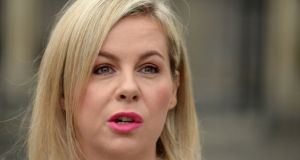 Lorraine Clifford-Lee: “People make mistakes. It’s the recognition of those mistakes and it’s how you act.”

Fianna Fáil senator Lorraine Clifford-Lee has apologised again for comments she made about Travellers on Twitter eight years ago.

The comments were “totally wrong and inappropriate” but were made before she entered electoral politics. Her “true” attitude (towards Travellers) has been reflected in recent years through her support of Travellers in Cabragh Bridge, Tipperary, the Traveller Education and History Bill and the ethnic status of Travellers, she told RTÉ radio’s Morning Ireland.

Ms Clifford-Lee said she had spoken to Martin Collins of Pavee Point by telephone and would be meeting him in person to again apologise. “I truly hope that my apology is accepted.”

“I have kept apologising and I will keep apologising. Those comments do not reflect who I am and what I do. It was something that happened before I was in electoral politics.”

After Mr Collins and two colleagues met the senator on Friday morning, Mr Collins described the apology by Ms Lorraine Clifford-Lee as “sincere and heartfelt”.

She had acknowledged the “huge hurt and offence” that she had caused with her tweets, he told RTÉ radio’s News at One.

Other politicians need to also acknowledge the offence they have caused with comments, added Mr Collins. “Many politicians from various political parties have made atrocious and outrageous comments about Travellers in the past, but they didn’t apologise and dug their heels in.

“Lorraine Clifford Lee took a more positive approach, she put her hands up and acknowledged that she did wrong.”

Mr Collins said he feared a rise in right wing populism, not just against his community, but also against Nigerians and those on direct provision. He also expressed concern that the next general election could be “toxic.”

Ms Clifford-Lee said she understood the impact and offence the comments had caused, “for which I am truly sorry.

“It was a long time ago. We all evolve as people. I am now a mother. I have educated myself about minority issues.”

She said that since she entered electoral politics she has worked hard on minority issues and was very sorry for what she said “back then”.

“People make mistakes. It’s the recognition of those mistakes and it’s how you act. Since I have been a public person I have worked very hard in relation to minority issues.”

Ireland and her constituency are now much more diverse, she added. “This is a very young constituency and it is very important that we put structures in place so that all can integrate.”