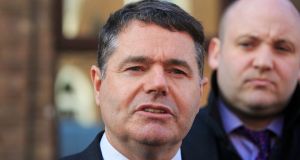 Minister for Finance Paschal Donohoe: told Noel Grealish, he was ‘disappointed with the apparent ethnic basis of your statements’. Photograph: Gareth Chaney/Collins

Minister for Finance Paschal Donohoe has written to the Independent TD Noel Grealish to criticise him for singling out Nigerians for sending money out of the country.

In a highly controversial Dáil question two weeks ago, Mr Grealish had questioned the amount of money remitted to Nigeria and asked if the Government was satisfied tax had been paid on the money or if it was the proceeds of crime or fraud.

Mr Donohoe has now written to Mr Grealish, explaining the controls and checks that are conducted by State agencies on transfers of cash that might be considered suspicious.

However, he also strongly criticises Mr Grealish, pointing out he had been given CSO figures by the Taoiseach in response to a previous question but chose to use much higher figures from the World Bank “which are estimations and may overstate the cashflow from Ireland to Nigeria”.

“I am disappointed with the apparent ethnic basis of your statements and would welcome any steps that you would be willing to take to clarify on this aspect,” Mr Donohoe wrote. “It is inappropriate to single out one country in the absence of evidence of wrongdoing.”

In his letter Mr Donohoe goes on to explain that banks, money remittance services, auditors and accountants are obliged to report to the gardaí and the Revenue Commissioners any suspicious transactions that may be linked to money laundering or terrorist financing.

“If you have any evidence or any wrongdoing in relation to remittances going to Nigeria or any other country, I would strongly advise you to bring it to the attention of An Garda Síochána,” Mr Donohoe says.