Roscommon eviction posts are ‘an incitement to hatred’, Taoiseach says 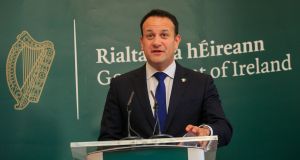 Taoiseach Leo Varadkar said it was unacceptable that social media companies would not take down some of the posts about the eviction in Co Roscommon. Photograph: Gareth Chaney/Collins

Some of the comments posted online about a recent Co Roscommon eviction were “an incitement to hatred” and should be removed by social media companies from their platforms, Taoiseach Leo Varadkar has said.

Asked about some of the commentary on the bailiffs and bankers involved in the incident, which included people advocating for them being shot or fed to pigs, Mr Varadkar said it was unacceptable that the companies would not “take down” the posts.

“As far as I am concerned, social media posts like that are incitement of hatred and incitement of violence,” he said. “Social media companies don’t seem to think that they are in anyway accountable. I know they can’t control the posts that people put up on websites or on social networks but they can take them down.”

The Taoiseach said newspapers and broadcasters “wouldn’t be allowed to promote that kind of stuff” and “would be held accountable” if they did so.

The McGann family were evicted from their home in Falsk last Wednesday week. Early last Sunday the property was stormed by a gang who beat the security guards, burned a number of vans and cars and forced them out of the house.

Speaking to reporters at Government Buildings this week, Mr Varadkar said he had watched a video of the eviction that was circulated on social media and attracted many negative comments.

“I don’t think anyone can say just from that video that they have a full understanding of what happened. But certainly nobody likes to see force being used on anyone unnecessarily. Nobody likes to see evictions happen, particularly in the run up to Christmas.”

The Taoiseach said the Government was working on proposals to police social media but needed to identify the “best and most effective way” to do so. He said work was ongoing on the mooted creation of a “digital safety commissioner” position.