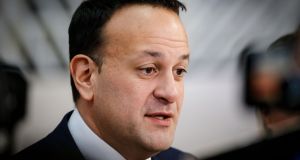 The State will receive €600 million from the liquidation of the former Anglo Irish Bank becoming “the single largest beneficiary” to unsecured bondholders, the Taoiseach has told the Dáil.

Leo Varadkar said unsecured junior bondholders would receive €270 million, less than half the payment to the State.

“We are now in line to receive €600 million that we the State, the Irish people never thought we would see again,” he said.

And he said the joint special liquidators “confirmed their expectation that further funds will be available to return to the State following the expected repayment of other creditors including subordinated bondholders”.

The former Anglo Irish Bank, which was merged with Irish Nationwide Building Society and renamed the Irish Bank Resolution Corporation, was liquidated in 2013. Taxpayers committed €34.7 billion in total, with the prospect of little if any recovery.

The Taoiseach rejected the “roll over Leo” moniker Sinn Féin finance spokesman Pearse Doherty attributed to him. Mr Doherty said Fine Gael, including the Taoiseach when he was a minister in 2015, pledged that there would be no repayment to bondholders.

“We were all assured that they would not be paid back,” he said, adding that it was Christmas present for bondholders while taxpayers pick up tab for a bank that should never have been bailed out in the first place.

“He said there was a moral case for making sure that any money recovered from the liquidation was returned to taxpayer and not junior bondholders.”

Mr Doherty told the Taoiseach that “under your watch bondholders are in line for a bumper pay out, scandalous stuff. They gambled on a bust bank and can’t believe their luck with this Government”.

He accused the Government of prioritising banks, vulture funds and bondholders. The State would take on the victims of cervical cancer or those misdiagnosed in Kerry with it or people going to court to seek rights for their children “but when it comes to bond holders who are unguaranteed,” the State would pay €33 billion of debt.

Mr Doherty asked the Taoiseach “are your promises given to the Irish people in 2015 not worth the paper they are written on?”

Defending the payout to the junior bondholders, Mr Varadkar said that Fine Gael did not put further money into the former Anglo Irish Bank but liquidated it.

He said that the Department of Finance had received legal advice that any attempt to change the terms of the liquidation would be challenged.