Majority relate to 1996 with a small number covering earlier years 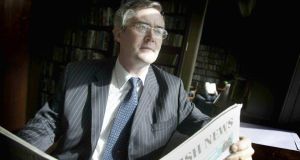 Today, the Public Record Office in Belfast is releasing 787 files under the 20/30 year rule introduced by the Northern Ireland Assembly in 2011.

The majority of these relate to 1996 although a small number cover earlier years.

Of these, 567 are categorised as “fully open”. A further 222 files are open but subject to some “blanking out” while just 47 files remain closed in full. Among these are files relating to “Extradition from the United States” (closed until 2080) and another on “Political Role Play” from 1994 which is closed until 2031.

The 20-year rule is being phased in over 10 years with two years’ worth of records being reviewed and released each year. This tranche includes files from the Stormont departments and the Northern Ireland Office with terminal dates of 1996.

Dr Éamon Phoenix is a political historian, broadcaster and journalist. He is a member of the Taoiseach’s Expert Advisory Group on Commemorations

Coronavirus: Northern Ireland death toll rises to 28 15:06
Labour TDs criticise decision for Dáil to sit on Thursday 15:09
Coronavirus: Nearly 600 prisoners released since start of outbreak 14:25
Teacher who admitted having child abuse images struck off register 14:20
Freedom of movement of EU nationals must be in accordance with law, judge says 14:10