National Museum urged not to ‘airbrush’ women out of history 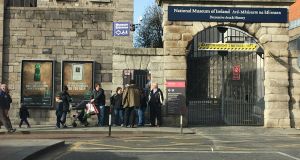 A permanent exhibition to mark women’s place in Irish history could be installed in the National Museum of Ireland, Minister for Culture Josepha Madigan has suggested.

She said the museum was planning a permanent exhibition on the last 120 years of Irish history and she believed that was an “ideal opportunity to explore the role of women and the contribution they have made”.

The Minister said “there should be a way to incorporate women’s place in that so that we are not airbrushed out of history”.

Ms Madigan was responding to former tánaiste Joan Burton who had asked why there were no plans for a permanent women’s museum.

She said all cultural institutions in Ireland were male dominated. The Labour TD said many countries “have a number of museums devoted to women and various elements of their lives”.

But she criticised the National Museum for being “hopeless on the subject of women”. The museum had a small exhibition in Collins Barracks on Wexford designer Eileen Gray who was “probably the most famous designer in the early 20th century”.

Ms Gray was world famous and in the south of France where she built one of the most outstanding houses of early 20th-century design “there is a full museum dedicated to her, although small and specialist”.

She added that for the 1916 Rising commemoration the National Gallery of Ireland put on a very small exhibition in a room on the third or fourth floor dedicated to Constance Markievicz.

Ms Burton said she wanted “full recognition of the role of women and their contribution to Irish and international history”.

Ms Madigan said the Department of Culture had produced a pop-up museum to mark 100 years of women in politics and public life to mark the centenary of women first being granted the vote and permitted to be candidates in parliamentary elections.

It had been in Dublin Castle and Istabraq Hall in Limerick and was currently at the Donegal County Museum in Letterkenny and the National Museum was planning a permanent exhibition on the last 120 years of Irish history.

“The opportunity exists to explore the possibility of a permanent exhibition. If there is to be a permanent place for women’s effects, it is important that it would be rolled out across the country.

“It should be brought around the country so that students and others can see 120 years of Irish history, something that is being considered by the museum at the moment.”