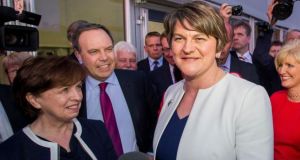 Ms Foster said it will run a candidate if the UK has not left the EU and has already agreed on its incumbent MEP.

“We will of course (contest the election) and we have already ratified Diane Dodds as our candidate,” she told the BBC.

Both she and Ms Foster are to meet with EU chief Brexit negotiator Michel Barnier in Brussels on Thursday.

Ms Foster said they will be pressing for “alternative arrangements” to the backstop guarantee on the Border in the withdrawal agreement, claiming there are technological solutions, a potential trusted trader scheme and possible small business exemptions.

“There is a different way to deal with this issue,” she said.

Ms Foster denied it was too late to press for alternative arrangements to the backstop, after the EU and prime minister Theresa May agreed there would be no re-opening of the withdrawal agreement during marathon talks in Brussels leading to a Brexit extension on Wednesday.

“This is an evolving process,” she insisted.

“We believe that there is a very important message to bring. Of course, we would have hoped the government would have brought this message before now.

“But we are going out with senior conservatives. We believe it is an important message that there is a way to get this withdrawal agreement through parliament if only there is a listening ear to different arrangements.”