‘The way forward is in compromise’ – the Belfast Agreement at 21

Irish Times editorial, 1998: Will it be sturdy enough to endure the strains and stresses? 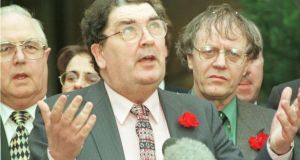 John Hume at the announcement of the Belfast Agreement in 1998, a deal he roughly outlined to British officials eight years earlier. Photograph: Alan Betson

On April 10th, 1998, the Irish and British governments signed the Belfast Agreement in Northern Ireland, bringing peace talks to an end.

Below is the editorial published on the front page of The Irish Times the following morning on Saturday, April 11th, 1998.

Perhaps, in time , the date will resonate in the collective memory of our children and our grandchildren, just as 1916 or 1912 or 1689 or 1798 have done for those of earlier generations. Where the inherited historic icons were the rebels of 1916 or the Larne gun-runners of 1912, or the victors in ancient battles, perhaps those of the coming times will be the peacemakers who buried the quarrel of 400 years inside the grey, prefabricated huts of the Castle Buildings at Stormont, in the days running up to Easter 1998.

Perhaps. What has been achieved over these days is a beginning. It marks but the start of the challenging experiment, so often and so painstakingly prescribed over the years by John Hume; the bringing together of the representatives of the people of all of Ireland to agree how they might share this space of land upon which they have been cast by the tide of history. They have set out a structure. Will it be sturdy enough to endure the strains and stresses which will bear upon it?

Other, earlier agreements — Sunningdale and Hillsborough — were unable to withstand the destructive forces which flow from our tribal polarities. But this time it will hopefully be different. Weighing in for optimism now is the fact that both the mainstream unionist party and the fringe unionist groups have played their role in a process which has engaged their imagination and their energies over two years. Similarly, in favour of success this time is the fact that Sinn Féin has also signed up.

It has been a long-drawn-out but remarkable progression to an agreement of these proportions. Some would root its origins in the foundation more than 25 years ago of the SDLP, a group of nationalist men and women who placed their faith in the capacities of peaceful and democratic action. Others might date it from the beginning of this decade when Secretary of State Peter Brooke declared that Britain had no selfish interest, in remaining in Northern Ireland. It might be said to have begun five years ago with the opening of the Hume/Adams dialogue. Or it might be calculated from the day that the Ulster Unionists elected as their leader David Trimble, a figure in the hardline mould and, by virtue of that, capable of leading his people towards change.

We are where we are because of the courage and the resolution of many committed and exceptional people. Political leaders have taken risks. The role of President Clinton cannot be underestimated. Perhaps his greatest gift to the process was the inspired appointment of Senator George Mitchell to be chairman of the talks. Officials and advisers have laboured with untiring energy and great imagination. Church leaders have worked patiently and often quietly. Ordinary people, individually and in combination, have consistently stimulated the process, urging those in authority to lead from the front and to build peace. Every grieving widow, every sorrowing parent, every orphaned child has contributed their pain and their witness to what has been put in place today.

The two great traditions of this island have each yielded on the absolutism of their positions. Nationalists have had to swallow the bitter truth that there will be no unit ed Ireland in the foreseeable future and that, if it comes, it will only do so with the consent of Northern Ireland’s majority. Unionists have had to accept, in the new cross-Border structures, that Northern Ireland is not as British as Finchley, as Mrs Thatcher once put it. And the people of this State will be asked to relinquish the territorial claim to Irish unity which lies at the heart of their political culture and which has been enshrined since 1937 within Articles 2 and 3 of the Constitution.

That which has been agreed among the political parties will be submitted to the test of the people’s will, North and South. That process of endorsement cannot be taken for granted. And there will be those at the extremes of both communities who will reject even such an endorsement. They will have to be engaged through persuasive political dialogue and, if they persist in the application of violence in the face of the wishes of the vast majority, with appropriate security policies. In the new Ireland which is born this Easter there can be no place for guns and bombs.

And it can be a new Ireland. As the world community is bound closer together through advances in communications and through cultural convergence, nineteenth-century concepts of political exclusivity built around the nation-state are yielding to more complex notions of identity and allegiance. The fatuity of seeking to enforce territorial claims while hearts and minds are divided by bitterness has been underscored in the blood of 3,500 dead. The way forward is in compromise, in trust and in a true willingness to respect diversity. It can deliver lasting peace, security and a greater degree of prosperity for all. It is time for Gael and Briton, Northerner and Southerner, those of all religions and of none, to rejoice in the privilege of living upon this bountiful and lovely island, to secure its future for all of our descendants- arid to do so in an expectation of lasing peace. This historic agreement, if endorsed by the people, will make it possible to do so.