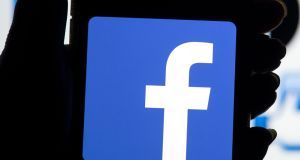 Facebook has removed ads by Renua after it was found to have breached the social media giant’s policies on political advertising.

The ads, which were running on the platform until Wednesday night, detailed immigration and crime policies and a promise to “restore the green passport” as “a symbol of our independent policy direction within the EU”.

The immigration policy advertisement featured an out-of-focus, hooded figure brandishing a knife at the camera, and warned of short sentences, suspended sentences and revolving door bail.

It said: “FG wants to increase the population of Ireland by 1 million extra over the next 20 years. This include [sic] 500,000 immigrants according to its Ireland 2040 plan. But FG has NO plans for extra prison places.” It went on to warn that this would result in shorter and more suspended sentences.

Facebook confirmed in a statement that it had removed the ads. It said the infringement related to transparency measures the company has made mandatory for political advertising, rather than the content of the ads.

“The adverts run by the Renua Ireland page were not correctly labelled as political ads and have been removed. In Ireland, anyone who wants to run a political ad on our platform must go through a verification process and ads about politics, elections and social issues must carry a ‘Paid for by’ disclaimer so people can see who has paid for them,” a spokeswoman for the company said.

The ad will remain in the social network’s library for seven years and will carry a note stating that it was taken down for failing to conform to Facebook policy.

Michael Farrington, Renua treasurer, said he was responsible for posting the party’s ads on Facebook. He said any breach of policy was unintentional, and that he had provided Facebook with multiple documents confirming his identity and verifying the page’s legitimacy.

“As far as we are concerned, we did anything that Facebook asked us to do. They haven’t told us what’s wrong with the ads, and if they do, we’ll sort it,” he said.

“They are clearly political ads, and we have no reason not to flag them as political ads,” he said, adding that there was nothing malicious or deliberate from the party’s point of view.

Liz Carolan, an online advertising expert and campaigner with the Transparent Referendum Initiative (TRI) first noticed the ads. She said that online ads are not covered by electoral laws, “so in this election we’re relying on parties to play fair, and on companies like Facebook to let us know who is giving them money to target messages directly at voters. Both sides let us down in this case,” she said.

She added that Renua is a legally registered political party in receipt of taxpayer funds, which signed up to Facebook as a political party, and yet was able to pay the social networking company to show ads asking for votes without Facebook recognising that this was a political activity.

“This shows yet again that self-regulatory steps by platforms fall far short of the standards we expect from election oversight in Ireland,” she said.