Party promises to increase number of gardaí by 2,000 at cost of €47m per year 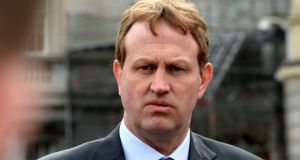 If in government Fianna Fáil would reform criminal legislation to deal with gangland figures in the same way members of the Provisional IRA were tackled, justice spokesman Jim O’Callaghan has said.

Stronger laws would be introduced so the “belief” of a Garda chief superintendent that an individual was involved in gangland crime could be used as evidence in criminal trials, he said.

These powers would be similar to those relied upon to help convict individuals for membership of the Provisional IRA.

“The Fine Gael government over the past nine years has done virtually nothing to confront the threat of gangland crime,” Mr O’Callaghan said.

The recent brutal murder of 17-year-old Keane Mulready-Woods in an attack linked to a Drogheda drug feud, has brought crime onto the agenda of the first week of the general election campaign.

Mr O’Callaghan said Fine Gael were “not interested” in confronting gangland crime and feuding, at a press conference in Fianna Fáil’s election HQ on Friday.

In Drogheda, Chief Supt Christy Mangan would be aware of who was directing the violence in the Co Louth drug feud, Mr O’Callaghan said.

The legislative amendment would help secure convictions in cases where members of the public would be fearful of giving evidence in court, he said.

“On the ground I think it would mean the people who are the serious operators of gangland crime could be imprisoned, I think it would be much easier to lock them up, and get them convicted of offences,” he said.

Speaking at the press conference, John Curran, the party spokesman for drugs policy, said the “complete savagery” of the murder and dismemberment of Mulready-Woods would be a “turning point” in the State’s response to the feud.

“People in middle class Ireland who take cocaine, and it is on the rise, they must realise that they are fuelling and adding to criminality in this country and they are responsible for the crimes that we are talking about,” Mr Curran said.

If attempting to form a government Mr O’Callaghan said he did not see Fianna Fáil canvassing for support from controversial figures such as Verona Murphy or Peter Casey if they were elected.

Elsewhere People Before Profit TD Richard Boyd Barrett has said “ the war and drugs has failed. The law and order approach has failed.”

Speaking after the latest shooting of two people in Ballymun he described the recent spate of attacks as “horrific and shocking”.

The Dun Laoghaire TD said there was no “quick fix” to the problem because it was a global issue.

But he said “we are failing our young people. We’re not putting our resources in schools and communities at the very earliest age to provide alternatives and support that will help divert young people from criminality.”

Solidarity TD Ruth Coppinger said “you can’t deal with the demand for drugs with a Garda response” and it had to be treated as a health issue.

“I don’t think you can blame somebody for causing gangland crime through (recreational) drugs on a Saturday night. I think you have to deal with the causes of drug abuse which are very much social and class-based.”

Ms Coppinger, whose Dublin West constituency has experienced shooting incidents and criminal activity said it was “just ridiculous” to say social drugs use was enabling crime because it was people would not “just suddenly stop using drugs”.

Rather than leaving drugs in the hands of criminals, “there has to be significant discussion in society in providing people with an addition with drugs if that is going to stop people” engaging in drugs crime.