Referendum on blasphemy expected to be held in October 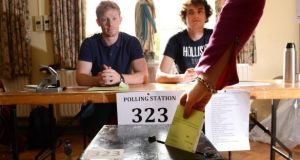 Referendums on blasphemy and the role of the woman in the home are expected to take place in October. File photograph: Cyril Byrne/The Irish Times.

The Cabinet has agreed that a referendum should be held later this year on removing the offence of blasphemy from the Constitution.

Minister for Justice Charlie Flanagan brought a proposal to Tuesday’s meeting seeking approval to proceed with the referendum, which is expected to be held in October.

It would likely take place at the same time as a referendum on changing a constitutional clause that prioritises a woman’s domestic role over work. The votes on the two topics and may coincide with a presidential election, if one takes place.

Voters will be asked whether Article 40.6.1 (i) should be retained in the Constitution. Blasphemy is defined as “matter that is grossly abusive or insulting in relation to matters held sacred by any religion, thereby causing outrage among a substantial number of the adherents of that religion”.

The Defamation Act 2009 made blasphemy a crime punishable by a €25,000 fine. As far back as 1991, the Law Reform Commission recommended that the offence of blasphemy be removed from the Constitution. The law came to prominence last year when a Garda inquiry began after a complaint was made over British actor and comedian Stephen Fry making critical comments about God during an interview on RTÉ. No prosecution was brought in the case.

“By removing this provision from our Constitution, we can send a strong message to the world that laws against blasphemy do not reflect Irish values and that we do not believe such laws should exist,” Mr Flanagan said.

Article 41.2 of the Constitution prioritises a woman’s domestic role over work with the Constitution saying the State “recognises that by her life within the home, woman gives to the State a support without which the common good cannot be achieved”.

The Constitutional Convention examined this issue and reported to the government in 2013. Some 88 per cent of members voted against its inclusion in the Constitution. Meanwhile, 98 per cent voted in favour of amending the wording to render it gender-neutral. It was also proposed to include other carers both “in the home” and “beyond the home”.

Planning for a referendum on that issue is less advanced but the proposal is also expected to be put to voters in October.