Q&A: Where are we on Brexit and the Irish Border issue? 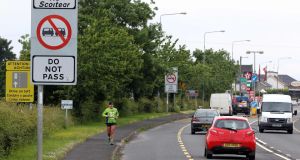 For Ireland the important thing is to get something signed up to by both the UK and EU which will ensure no return of a ‘hard Border’ no matter what way the Brexit talks end. Photograph: Paul Faith/AFP/Getty Images.

Where are we on the issue of the Irish Border after Brexit?

We are reaching one of the crunch points – and there is potential for serious tensions between Dublin and London. Irish issues - including the Border - are one of a group on which “sufficient progress” must be made if EU leaders are to agree by mid-December that the Brexit talks can move on to discuss a trade deal between the UK and EU. As the leaders must agree this by consensus, Ireland has some leverage. A statement by Taoiseach Leo Varadkar on Friday indicated what Ireland is looking for. But Britain may find it impossible to sign up.

It won’t all the sorted by December - not by a long way. So for Ireland the important thing is to get something signed up to by both the UK and EU which will ensure no return of a “hard Border” no matter what way the talks end.

What is a hard Border?

Nobody is quite sure. Freedom of movement of people across the Border looks likely to continue post Brexit. The issue is the movement of goods, animals and so on - the daily flow of commerce. On Friday the Taoiseach said Ireland was looking for a commitment that there would be no “regulatory divergence” between the North and South after Brexit.

Regulatory divergence? Surely not something to get the heart racing?

Usually not. But this time it cuts to the heart of where the debate is at. Britain wants to leave the agreements which guarantee free trade across EU borders – the customs union and single market. Doing this would mean a Border would return on the island of Ireland. What the Taoiseach is saying is that the rules and regulations need to be the same on both sides for free trade to continue. This tactic is designed to counter the British argument that all this can only be sorted when the talks move on to the next phase and focus on a trade deal. This tension was reflected in statements by Minister for Foreign Affairs Simon Coveney and British foreign secretary Boris Johnson ahead of a meeting in Dublin on Friday.

But how can rules and regulations be the same on both sides of the Border if the UK leaves the EU trading bloc?

Good question. Unless Britain agrees to remain inside the existing arrangements, then the only way this could happen would be if the North had some kind of special status and it remained withing the EU customs union and single market. This was hinted at by a recent European Commission paper. But London has ruled this out, saying it cannot accept customs checks and controls between Britain and the North - which would be needed in this kind of arrangement.And the DUP has rejected the idea too .

So what is the way out of this?

There is no obvious way forward. Britain will want to fudge the issue with some kind of a commitment to avoid a “hard Border.” But Dublin is suspicious for two reasons. The first is that a fudge now could involve the State coming under pressure later in the talks to accept some kind of a trade Border being imposed. The second related fear is that London is prepared to see an Irish Border return and will work to make it as free as possible only as a template to secure more freedom in trade between it and the EU in general. But the rest of the EU won’t sign up for Britain leaving the EU and its trading arrangements and simultaneously retaining free trade.

Could this get nasty in the next few weeks?

Yes. If Britain does move on agreeing a financial settlement with the EU, then the Irish Border will be the crunch issue moving towards the summit. There is the possibility here of a big scrap between Dublin and London – though so far at least we seem to have strong support from the rest of the EU on this.