What exactly is at issue in the Murphy V O’Brien saga? 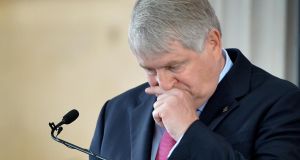 The controversial passage from Catherine Murphy’s Dáil statement of last week refers to Denis O’Brien’s dealing with IBRC. It involves information she received about the interest rate he paid on his borrowings and his dealings with former IBRC chief executive, Mike Aynsley.

The difficulty in assessing this information is that Denis O’Brien claims that at least some of it is false and former senior IBRC figures, including Aynsley, have also taken issue with it. We also do not know what kind of arrangements IBRC struck with other borrowers - and whether O’Brien was dealt with differently. However a statement from Aynsley last week does provide some context on the bank’s overall treatment of big borrowers.

The background here is that IBRC was the institution formed in 2011 to take over the businesses of the former Anglo Irish Bank and Irish Nationwide. Much of the big property-related borrowings from the two banks moved to Nama, but business-related borrowings, such as O’Brien’s, stayed with IBRC and were thus overseen by its board and management.

O’Brien has always said that he was a “performing” borrower, in other words he was repaying his loans. Former IBRC chairman Alan Dukes and Aynsley have both stated categorically that nobody was given any special deals. O’Brien was one of Anglo’s bigger borrowers. It has been reported that at the time of the State takeover in early 2009 O’Brien had over €800 million in borrowings from Anglo and Murphy’s Dáil statement referred to outstanding borrowings of €500 million. Repayments in the interim would explain the difference.

Most attention in Catherine Murphy’s statement has focused on her claim that Denis O’Brien was paying a 1.25 per cent interest rate when, she said, he could have been expected to pay a rate of 7.5 per cent. Beyond what Murphy has said, we do not know where this information came from – and O’Brien has claimed that what Murphy said was materially incorrect.

If O’Brien, or any other IBRC client, was paying a 1.25 per cent rate, then this would, indeed, be low. Clarity would be needed on a few points here, but the fundamental issues are, first, what rate O’Brien was paying on his overall borrowings with IBRC and how this compared to other borrowers in IBRC. Given the privacy afforded to private banking arrangements we may never know this information.

The second issue which arises is whether the rates charged by IBRC to all borrowers were lower than market rates in general. This is possible - likely, even given that IBRC’s focus was on getting the initial borrowings back, rather than making an ongoing profit.

The focus of IBRC, as outlined in Aynsley’s statement which referred to how the bank dealt with clients in general, was to recover “as much of the loan balance as possible”, and with performing borrowers expected to pay off all they owed. It often took time for big borrowers to refinance their loans, he said, given the state of the markets at the time. Interest rates on large borrowings are not a matter of public record, but it could easily have cost a big borrower between 5 - 7 per cent to refinance loans during the crisis - if they could do so at all - and the rates charged by IBRC would almost certainly have been lower.

The other issue raised in Catherine Murphy’s statement is a suggestion that O’Brien had a verbal agreement with the former IBRC chief executive “to allow him to extent the terms of his already expired loans.” She added: “We also know that the verbal agreement was never escalated to the credit committee for approval.” According to Murphy, O’Brien wrote to IBRC liquidator Kieran Wallace, after the bank was wound up, calling for the same arrangements to be extended. IBRC was wound up in early 2013 as part of a financial transaction by the state to try to reduce the financial burden of winding up the two former banks. So at that responsibility for managing O’Brien’s loans would have moved under Wallace’s jurisdiction.

Aynsley, in last week’s statement, said he could not discuss individual cases, but that any suggestion that he or any other member of the management team acted in contravention of procedures put in place after he took over Anglo in August 2009 was false. These procedures ensured, he said, that no commitment could be made to a borrower without being given the nod by the credit committee, he said and - for bigger borrowers - board sign off as well.

His statement said that, for larger clients, repayments often had to be rescheduled over a longer period than the original loan. In these cases a strategy was agreed by the credit committee which, firstly, approved a phase one pay down schedule for a significant portion of the loans. The agreement was that a further negotiation would take place on repaying the balance of the loan once the phase one target was met. He said it would be expected that the phase two target “would have taken place automatically and proceeded back to the Credit Committee for a commitment approval, followed by the board as well if threshold levels required its approval.”

Finally, it important to note that we are dealing with two separate issues here, with the only link being that they both relate to O’Brien’s dealings with IBRC. Murphy’s Dáil statement was in a debate on the investigation into the sale of Siteserv to Denis O’Brien. The planned RTÉ report which was the subject of the initial court action and the issues raised by Murphy relate to O’Brien’s treatment as a borrower.