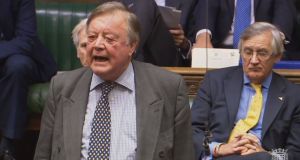 Ken Clarke, a staunch Europhile and supporter of the Remain campaign, said while the UK government had committed to not reinstating a fixed border, this would be the inevitable outcome of leaving both the customs union and single market. File photograph: PA Wire

Former conservative chancellor Ken Clarke has said the UK should stay in the customs union to solve the Northern Ireland Border question or, alternatively, position it along the Irish Sea.

Mr Clarke, a staunch Europhile and supporter of the Remain campaign, said while the UK government had committed to not reinstating a fixed border, this would be the inevitable outcome of leaving both the customs union and single market.

“So the government’s position is perfectly sincere and it’s totally contradictory. And it’s baffling people in Belfast, Dublin and Brussels trying to find a solution to that,” he told the BBC’s The View programme on Thursday night.

“The answer seems to me to be perfectly obvious...you can leave the EU and keep the best free trade deal that we have with anybody in the world, with our most important and biggest market. Do that, you solve the Irish border problem,” he said.

Failing that, as a “fallback position”, Northern Ireland could remain in the single market and customs union.

“If the Brexiteers, the right-wing nationalists, won’t allow us to do that, then the best solution after that, I agree with the Taoiseach actually, is that you have a border down the Irish Sea.”

Clarke, once described by The Guardian as a “lifelong, passionately devoted pro-European”, said the issues of the single market and customs union were never at the heart of the Brexit campaign; it was only since the vote that Conservative Party “zealots” wanted to pull out of both.

Defending Ireland’s right to put the emphasis of negotiations on Northern Ireland, he said that it stood to be damaged most by Brexit, after the UK.

Branded a “rebel” despite years of holding the establishment line in nearly 50 years of political life, Mr Clarke’s views will come as little surprise to party colleagues.

In a speech to the Commons at the beginning of the year, he compared the UK’s trade prospects in the aftermath of leaving the EU to Alice in Wonderland.

“Apparently you follow the rabbit down a hole and you emerge in a wonderland where suddenly countries around the world are queuing up to give us trading advantages and access to their markets that previously we have never been able to achieve as part of the EU,” he said.

Mr Clarke is a veteran of Conservative-led governments, occupying various roles including chancellor and home secretary.

But deeply sceptical of Brexit, he said in the aftermath of the referendum result that it could prove to be a disaster.

“We are a trading nation and we have political interests in all parts of the world, where we will find our voice and our clout substantially diminished.”