Frictionless Border an imperative for Brexit talks to move on - Varadkar

The UK must find a way to ensure there is no return to Border checks on the island of Ireland after Brexit before the second phase of the talks on a future trading relationship with the EU can begin, Taoiseach Leo Varadkar has said. Video: Reuters 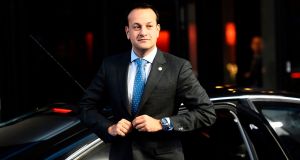 The UK must find a way to ensure there is no return to Border checks on the island of Ireland after Brexit before the second phase of the talks on a future trading relationship with the EU can begin, Taoiseach Leo Varadkar has said.

Speaking to journalists as he arrived at the EU Social Summit in Gothenburg on Friday, Mr Varadkar insisted that if the UK could “unilaterally” remove its possible membership of the Customs Union “from the table” in the talks, then Ireland was also determined to set some “parameters”.

Mr Varadkar meets British prime minister Theresa May later on the fringes of the summit as time runs out on the UK’s hope to have EU leaders sanction the move to the second phase of the talks on trade when they meet next month.

The Taoiseach said he remained “an optimist” about the timeframe. “I think it is certainly possible.... but if we have to wait until the New Year or wait for further concessions then so be it. But I think it would be in all our interests to proceed to phase two in December.”

The Taoiseach said that it was up to Ms May to “put meat” on proposals that the UK had already made on establishing a “customs partnership union” with the EU. He insisted there could not be a “regulatory gap” between the UK, EU and Ireland.

“The UK side has put forward a proposal that there be a customs partnership union between the UK and EU. We would like to tease out what that means ,” he added.

“We’ve put out a mechanism by which that can be achieved. That is to say that we’d avoid any regulatory gaps between Northern Irelan and the EU after Brexit and that’s what we want written into the conclusions.”

In its papers on customs and Northern Ireland published in August, the UK suggested a couple of ways of dealing with the issues post-Brexit. One approach involved a complicated “customs partnership” system.

This would see the UK act as the external Border of the EU, as at present, maintaining a tracking system on goods which were to be re-exported to the EU. On these goods EU tariffs and standards would be applied, while goods circulating only in the UK would only have standard tariffs applied.

“We’ve been given assurances for 18 months,” the Taoiseach said, “ that there’ll be no hard Border in Ireland, that there won’t be any physical infrastructure, that we won’t go back to the Borders of the past. And we want that written down in practical terms in the conclusions of phase one.”