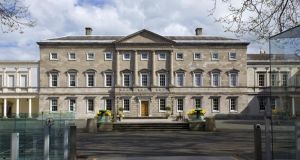 Sinn Féin won the highest share of the popular vote (24.5%) ahead of Fianna Fáil with 22%, but it won fewer Dáil seats than Fianna Fáil – 37 versus 38 . Photograph: iStock

When does a new government have to be formed by?

There is no deadline for this as there are, in legal and constitutional terms, no rules on forming a government. The Constitution is silent on the issue, and it is left to the political parties to agree a coalition government with a majority of 80 seats.

In political and moral terms there is, of course, a time limit as the public would grow frustrated if the parties cannot reach an agreement on forming a government.

It took more than 70 days to establish a government after the 2016 election as the parties were unable to agree a coalition with a majority. Ultimately a minority Fine Gael-led government, supported by Fianna Fáil from the opposition benches though a confidence and supply deal, was established.

What happens if nobody is elected taoiseach when the new Dáil meets on Thursday?

The existing government continues to function until a replacement is appointed. Leo Varadkar will continue serving as Taoiseach and his Ministers will remain in their roles.

Technically there is no interim or caretaker taoiseach or cabinet, though this is the role they fulfil until the make-up of a new government is confirmed.

But didn’t Mary Lou McDonald and Sinn Féin win the election? Why isn’t she taoiseach?

Sinn Féin won the highest share of the popular vote (24.5 per cent) ahead of Fianna Fáil with 22 per cent, but the party won fewer Dáil seats than Fianna Fáil – 37 seats versus 38 – and it is seats that are counted in government formation, not votes.

Sinn Féin does not have enough votes to reach the magic number of 80, even with other like-minded parties, to be able to form a government or to elect Ms McDonald as taoiseach.

Is Sinn Féin right to accuse Fianna Fáil and Fine Gael of ignoring its mandate?

The two parties – formerly known as “the two main parties” – can ignore this mandate given that 75 per cent of people did not vote for Sinn Féin. Fianna Fáil and Fine Gael (who won a combined 43 per cent of the vote) could, on paper at least, form a government with the Greens or two other small parties, pushing them over the 80-seat mark and representing more than 50 per cent of the vote, which could be deemed an alternative democratic mandate.

However, Fine Gael, which came third in the election and has 35 seats in the Dáil, has said that it is preparing to go into opposition and would only consider a coalition with Fianna Fáil as a last resort.

How long could this limbo continue for?

Technically indefinitely, but this is highly unlikely in practice. In theory Minister for Finance Paschal Donohoe could present a new budget – a critical point in the life of any government – in October, but this would hardly pass given that Fine Gael is in a minority and is no longer supported by Fianna Fáil.

It would be highly unusual if there was no new government by the autumn, heaping huge pressure on all parties to agree a compromise and form a government.

Who decides if another election is needed?

Only Taoiseach Leo Varadkar can seek to dissolve the 33rd Dáil and call an election.

Does President Michael D Higgins have to approve?

Could the President play a role in trying to help form a government?

Technically no, but if the political stalemate drags on the situation could force him into unchartered waters. There is nothing in the Constitution providing the President with any role in the formation of a government as the role of the presidency, as head of State, sit above politics.

However, article 28 says the Taoiseach shall keep the President generally informed on matters of domestic policy, so Mr Varadkar could keep Mr Higgins appraised of the deadlock, and, under article 13, the President could technically refuse to dissolve the Dáil – on the taoiseach’s advice – and ask the parties to try harder to form a government. However, the general view is that this is a problem for the Dáil to figure out and not the President.

Has this happened in the past?

No. Coalition governments were easier to form, albeit after difficult negotiations, before the past decade of political fracturing in the wake of the economic crash. No president has refused to dissolve a Dáil at the request of a taoiseach who has ceased to command a majority in the Dáil.

Is there any guide that could prove useful if things become chaotic?

In 1987 the then outgoing taoiseach Garret FitzGerald reached an agreement with president Patrick Hillery that – in the event of a deadlock over the election of a taoiseach and the formation of a government – FitzGerald would offer his resignation but not initially seek a dissolution of the Dáil.

Instead FitzGerald would, as caretaker taoiseach, try to break the deadlock in discussions with party leaders. If that failed he would return to the president who would then request him formally – and publicly – to make a further effort to resolve the deadlock. Under their plan only if that second attempt failed would FitzGerald seek a dissolution of the Dáil, paving the way for a second election.

In the end this wasn’t necessary; Independent TD Tony Gregory abstained on the vote on the election of taoiseach and Fianna Fáil leader Charlie Haughey took power.

Could things get messy with parties trying to influence the President?

They have in the past. In one of the most controversial manoeuvres in Irish political history, senior Fianna Fáil figures sought to persuade Hillery in January 1982 not to dissolve the Dáil after the Fine Gael-led government fell in the wake of a controversial budget and instead allow Haughey form a government without the need for a general election.

How does it work in other countries?

The heads of state of other parliamentary democracies often play a role in the formation of a new government. In Belgium, the Netherlands and Italy, a politician – usually the leader of the biggest party – can be appointed a “formateur” in a bid to find compromises on various issues with different political parties during marathon talks to form a coalition government.

Their work may be preceded by one or two “informateurs” – typically a retired statesperson or former minister or party leader who initially attempts to find common ground between parties and to identify a likely coalition.

Belgium holds the record for the longest government formation; it took politicians 541 days to form a new government after the country’s 2010 general election.