Questions on government formation have obvious but difficult answers 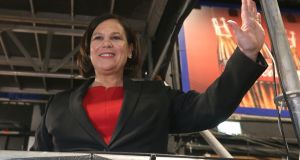 The prospects for government formation after this extraordinary election are both quite complex and very straightforward.

The remainder of the seats will be occupied by a scattering of small parties, micro parties and independents.

It’s hard to see how a government is formed without two of the big three parties coming together.

The idea touted by Mary Lou McDonald on Sunday that Sinn Féin could lead a coalition of the left and command a majority seems - at this juncture anyway - seems unrealistic, both numerically and politically.

Fianna Fáil’s two preferred routes to government - a coalition of the Greens and other small parties, or a confidence and supply arrangement facilitated by Fine Gael - seem certain to run into the same dead end: on current projections, the numbers aren’t there. Fine Gael, ditto.

If another confidence and supply is out, what does that leave? The arithmetic suggest three options: Fianna Fáil-Fine Gael, Fine Gael-Sinn Féin or Fianna Fáil-Sinn Féin; simple.

The politics of that, though, are complex.

How do either Micheál Martin or Leo Varadkar get over their written-in-blood pledges not to share power with McDonald and the shadowy figures they suggest are lurking behind the party’s command structures?

How does Martin do an about-turn on his similar pledge not to form a coalition with Fine Gael - already offered by Leo Varadkar in the course of the campaign and surely again soon? Does he want to? Or will he leave the job to someone else? Such questions are now unavoidable.

Or could Varadkar make a groundbreaking move to bring Sinn Féin in from the political margins and form an historic coalition with McDonald and her party? The bold nature of the move would probably appeal to the Fine Gael leader.

But could he sell it to his party?

The exit poll suggests that 70 per cent of Fine Gael voters are opposed to a Sinn Féin coalition. The figure for Fianna Fáil is 60 per cent. If Sinn Féin is to be brought into government by either Martin or Varadkar, there will be significant opposition in their own parties.

There is also another pertinent question: does Sinn Féin actually want to be in government with Fianna Fail or Fine Gael?

In previous elections, it was squeezed out at the end of the campaign in part because it was not relevant in many voters’ minds to the government formation process. McDonald’s insistence that Sinn Féin was interested in government - even as a minority partner - made sure that this didn’t afflict the party again.

That was a tactical success. But does Sinn Féin strategically want to be in government now - or does it want Fine Gael and Fianna Fáil to form a government so it can remain in opposition where it can grow further, and realistically plan to lead government after the next election?

The obvious thing to do for Fine Gael and Fianna Fáil to stem the Sinn Féin tide is to bring the party into government where it would find as Labour has done, and the Greens, and the Progressive Democrats and now the Independents who joined Enda Kenny in 2016, that power comes at a price.

But Sinn Féin can see this too. One of the distinctive features of the way Sinn Féin has gone about its business for a long time now is that it always thinks long-term, and always acts strategically.

And if - after much posturing and pretend negotiating - it becomes clear that Sinn Féin can’t or won’t agree to enter government, the focus will revert to a potential Fine Gael-Fianna Fáil coalition. The choice may come down to that, or another election.