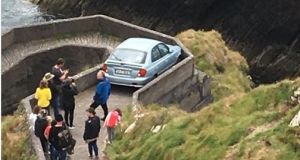 This hapless motorist was trapped on ‘Sheep Highway’ on Wednesday after venturing along the pedestrian walkway. Photograph: Blasket Island Ferries

Blasket Island Ferries called it “that time of the year again” – and posted a picture to prove its point.

It appears some of Ireland’s more adventurous motorists – presumably those unfamiliar with local roads – are prone to squeezing their cars down the windy, vertiginous, and very much pedestrian pathway to Dunquin Pier, the jump off point to Great Blasket Island off the Kerry coast.

The snaking laneway is also known as “Sheep Highway”, although that is a reference to the animals who frequent its stony heights, not the hapless motorists who appear to follow each other into the unknown.

At the top of the pathway there are no through signs and two concrete bollards make it difficult for a car to squeeze through. The driver has not yet been identified.

“Well it’s that time of year again where the ‘no through sign’ at the top of the pedestrian pathway down to Dunquin Pier gets ignored,” Blasket Island Ferries said on its Facebook page on Wednesday alongside a photograph of the latest transgression.

“This learner driver has managed to get themselves fairly stuck. Good news that our Ferries weren’t running today, it would have been a catastrophe trying to bring people back from the island.”

The website Travellatte.net noted how a similarly impeded motorist “found internet fame” in recent years when pictures of his wedged SUV went viral.

“Apparently, a visiting Irishman had planned on camping at the pier to catch the first ferry the following morning. Instead, he had to be rescued by a tow truck,” it said.

Such incidents are said to be a major potential issue for ferry sailings.