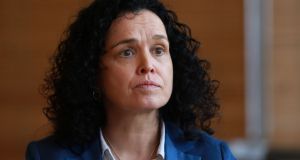 Phil Ní Sheaghdha, head of the Irish Nurses and Midwives Organisation. The INMO this week set the Government a one-month deadline to produce a “serious pay offer”. Photograph: Nick Bradshaw

Within the next few weeks pay pressures which have been building up on the Government for the last few months will come to a head.

All of these issues have the potential of generating industrial unrest in key sectors.

The pay pressures also will add to the complications facing the Government as it prepares for the budget in October.

These workers are not public servants but their unions argue they experienced pay cuts similar to those applied to State employees during the austerity years.

Those working in Section 39 organisations contend that while public service staff have begun seeing the restoration of pay cuts, they have not.

Nurses and midwives are also to hold a special conference towards the end of September as part of their demands for pay improvements to address recruitment and retention difficulties in the health service.

The Irish Nurses and Midwives Organisation this week set the Government a one-month deadline to produce a “serious pay offer”.

The union hinted at industrial action if this did not happen.

Nurses have been waiting for months for the report of the Public Service Pay Commission on recruitment and retention problems in the health sector which is due imminently.

However, it is not now expected that the commission will recommend across-the-board rises in basic pay for nurses to encourage them to remain in the public system.

There may be increased allowances suggested as part of a proposed new over-arching framework, and a future review as part of the implementation of the Sláintecare health reforms. However, it remains to be seen whether this would be sufficient for the 50,000 general nurses, psychiatric nurses and midwives working in the public healthcare system.

Once the commission report is published the Government is likely to commence a four-week round of talks on its findings.

However, it will be conscious of the dangers of any agreement reached with nurses leading to knock-on claims elsewhere in the public service.

In a parallel process the Government has been engaged with the broader public service trade union movement on dealing with the lower pay rates that apply to more than 60,000 staff across the public service appointed since 2011.

One union, the Teachers’ Union of Ireland, already has a mandate for industrial action, and others could follow in the weeks ahead if they are dissatisfied with the outcome of this process.

The Government is expected to focus mainly in these negotiations on the newer-entrants pay issue.

Apart from pressures from trade unions, Fianna Fáil is also seeking that the Government begin moving on this issue in the forthcoming budget in October.

However, the Government has estimated ending the two-tier system would cost about €200 million and it seems unlikely this would be put in place in a single year.