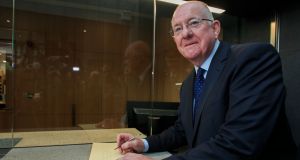 The referendum to remove a reference in the Constitution to the woman’s place in the home has been postponed, Minister for Justice Charlie Flanagan confirmed on Wednesday.

The referendum had initially been expected to take place on October 26th alongside the presidential election and a referendum on removing the offence of blasphemy from the Constitution.

However, The Irish Times reported in July that it would be delayed. Mr Flanagan has now confirmed it has been delayed to allow for Oireachtas scrutiny on whether the article should be deleted outright or simply amended to make it gender neutral, as per the advice of the Constitutional Convention and the Department of Justice’s internal task force.

In a statement on Wednesday, the Department of Justice said the decision of its joint Oireachtas committee to schedule pre-legislative hearings meant there will “not now be sufficient time” for the Oireachtas to consider the legislation and make the October date.

Article 41.2 of the Constitution reads: “The State recognises that by her life within the home, woman gives to the State a support without which the common good cannot be achieved.”

It goes on: “The State shall, therefore, endeavour to ensure that mothers shall not be obliged by economic necessity to engage in labour to the neglect of their duties in the home.”

Mr Flanagan said he was “disappointed” with the delay. “I very much regret that on the occasion of the centenary of women achieving the right to vote in Ireland, the Irish people will not have an opportunity to remove Article 41.2 from our Constitution,” he said.

“I believe the Article, which seeks to define where women belong in Ireland as being in the home carrying out duties, is not just sexist and reductive, but completely at odds with the Government’s gender equality policies.

“I note the outcome of today’s meeting of the Joint Oireachtas Committee on Justice and Equality. I am very disappointed that the referendum cannot now proceed on October 26th.”

The National Women’s Council of Ireland (NWCI) said it was in favour of taking more time to consider the issues, and called for a “national discussion” to take place.

“NWCI is calling for the Oireachtas committee and the Government to facilitate a national discussion before the referendum on Article 41.2 proceeds,” said director Orla O’Connor.

“A public conversation is necessary so that the referendum debate can be informed and the issues surrounding the article can be explored and concrete proposals developed which the Government can act on and be held to account,” she said.

“The forum should consider what we want to see in our Constitution and in addition, go beyond that to what we need in legislation, policy, and investment to facilitate the women and men make real choices regarding care, family and paid work.

“If a simple deletion of Article 41.2 is put to the people, we are only offering the option of removing an old-fashioned definition of the home and women’s role in society, and we are missing this unique opportunity to express the positive contribution of equality in the home, care and work of all kinds.”

A spokesman for the Department of Justice said separately that the referendum on removing the offence of blasphemy would go ahead on October 26th.

“It is anticipated that it will be debated in both houses as soon as each convenes in September,” he said. “The intention of the Government is that a referendum will be held on this issue on October 26th.”