Alcohol advertising to be banned near schools from November 2019 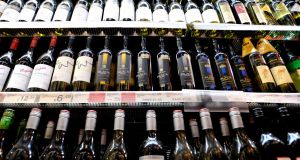 The bill will see detailed labelling on alcohol products with ingredients, energy density (calories) and health warnings about the link between alcohol and cancer and other diseases.

Alcohol advertising will be banned within 200 metres of a school, crèche or a local authority playground from November 2019.

Drink companies and clothing manufacturers have a year to prepare for the first elements of alcohol legislation to be implemented, which will restrict cinema and outdoor advertising, and ban marketing on children’s clothing.

It will also be banned on public service vehicles including buses, trains, at bus stops and train stations .

From November 12th next year, advertising of alcohol products will also be banned in cinemas except where films are for those over 18 or where cinemas have licensed premises.

A ban also comes into place on that date prohibiting the advertising of alcohol on children’s clothing.

Minister for Health Simon Harris at the weekend signed the order to commence 23 sections of the Public Health Alcohol Act, which was finally passed by the Oireachtas in September after almost three years going through the Seanad and Dáil.

The Minister, who has described the legislation as groundbreaking, said it was the first time since the foundation of the State that legislation has been introduced to deal with alcohol as it affects health.

“We know that we have a relationship with alcohol in this country that is not good, damages our health, harms our communities and harms many families,” he said.

“The measures in this Bill will make a real difference to changing the culture of drinking in Ireland over a period of time.”

All elements of the legislation will have either a one, two or three year lead in to allow the industry get ready for change.

The main provisions introduce minimum unit pricing, a cost below which alcohol cannot be sold; restrict alcohol advertising and sponsorship; segregate alcohol from other retail products in supermarkets, petrol stations and other retail outlets; and provide for detailed labelling on alcohol products with ingredients, energy density (calories) and health warnings about the link between alcohol and cancer and other diseases.

Segregating alcohol from other products and minimising its visibility in mixed retail outlets, one of the most controversial elements of the Bill, will have a two-year lead in.

In three years’ time a ban comes into place on alcohol advertising in a sports area during a sporting event aimed at children or at events in which the majority of participants or competitors are children.

Alcohol sponsorship of events aimed at children and involving driving or racing motor vehicles will also be prohibited from November 2021.

No date has been set for the introduction of minimum unit pricing, 10c per gram of alcohol, which the Government wants to introduce simultaneously with the North, because the Northern Ireland Executive and Assembly are not in operation.

But Mr Harris said that all parties in the North are in agreement with the provision and it is already in place in Scotland and due to come into operation in Wales next year.

Detailed labelling is expected to take at least three years to come into place. The Department of Health will draft regulations to provide for cancer and other health warnings, but these then have to be referred to the European Commission for consideration of their potential impact as a barrier to trade.

Ireland will be the first country in the world to have cancer warnings on alcohol labelling if the controversial measure is accepted.