North fund for disadvantaged areas ‘did not operate transparently’ 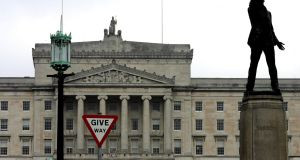 Concerns have been expressed by Northern Ireland’s Auditor General over the governance of a fund set up by Stormont to help disadvantaged areas.

The Social Investment Fund, administered by the Executive Office, allocated millions of pounds to disadvantaged areas in the region. The Executive Office is a government department in Northern Ireland with responsibility for running the Stormont executive.

The money was initially intended to be spent in the three years to March 2015, but many projects have been delayed and the SIF delivery period has been extended to 2019-20.

The budget for the fund has been increased by more than £13 million.

A report by Auditor General Kieran Donnelly found the scheme did not operate transparently.

The report found the Executive Office does not hold a clear audit trail in relation to the awarding of public money from the fund.

It identifies a number of serious concerns in the initial stages of the scheme, including conflicts of interest which it found were not always appropriately dealt with.

The report also found that documentation around project selection and prioritisation was poor.

It highlighted one of the projects, an SIF-funded redevelopment of a derelict site on Bryson Street in east Belfast, which is now costing the public purse in rent.

The GPs who operate from the site entered into a 25-year lease with Landmark East, at an annual rental of £90,000. The Health and Social Care Board has agreed to fund the annual lease costs.

The report found the project does “not represent value for money”.

“The public purse has paid £1 million to construct an asset which it is now also renting at a cost of £90,000 per annum. This equates to a total cost of £2.25 million over the life of the lease. In our view, this does not represent value for money,” the report said.

However the report acknowledges that once projects became established, governance improved.

It concludes by urging that lessons are learned and improvements made when similar public spending schemes are developed.

The report makes seven recommendations including the Executive Office holding a clear audit trail, “to justify why decisions were made and demonstrate that assessment processes have been applied fairly, consistently and transparently”.

Mr Donnelly said the findings over the governance of the scheme are “very concerning”.

“The importance of good administration and ensuring conflicts of interest are adequately handled should be well understood in the public sector,” he said.

“But in the case of SIF, the guidance produced by the department was inadequate, there was little evidence that procedures were followed, and a number of conflicts weren’t declared. This is very concerning.

“Evidence from my audit work across the public sector suggests there is a role for additional expertise to support good governance and maintain high standards.

“Whilst audit plays a valuable role in identifying lessons to be learnt once schemes are operational, issues of propriety and conflicts of interest must be fully and properly explored when schemes such as SIF are being designed.”

The Social Investment Fund hit the headlines in 2016 in a row over an alleged UDA boss’s role as a chief executive of a charity awarded a contract to manage £1.7 million from the fund.

Convicted armed robber Dee Stitt, who denies being a UDA chief, faced down calls for his resignation after a newspaper interview in which he launched a foul-mouthed tirade against the Government and claimed his flute band in North Down provided “homeland security”.

Mr Stitt stood down as chief executive of Charter NI in September.

He said his decisions was due to the impact on his family of “media coverage”.

A spokesman for The Executive Office said the department accepts all the recommendations in the report,

“The Executive Office recognises that there were shortcomings in the early stages of SIF and welcomes the acknowledgement by NIAO that once projects became established, governance improved,” the spokesperson said.

“The report also identifies completed projects where outcomes to date are promising and value for money is likely to be achieved.

“SIF is a fund of £80 million which will deliver 68 projects up to 2020. To date, SIF revenue projects have improved the lives of almost 24,000 participants through employment, early intervention and education initiatives.

“In addition, 22 capital projects have been completed and a further 27 are in progress. These capital projects will deliver improvements to 115 premises, providing enhanced community facilities in the most deprived neighbourhoods across Northern Ireland.”

Alliance MLA Chris Lyttle called for a public inquiry into the fund. Mr Lyttle, who referred the SIF to the Audit Office, said public concern had been borne out by its report.

“The management structure, in addition to the lack of minutes and accountability around the entire scheme, are just some of the many reasons Alliance brought an Assembly motion expressing deep concern around the formation, implementation and operation of SIF, while calling for an independent review of the entire process. However, it was defeated by a combination of DUP and Sinn Fein votes,” he said.

“These fundamental issues are why there should be an independent inquiry commissioned into SIF and its operation immediately, so the lessons which this report outlines can be learned and we can ensure there is no repeat of the vast sums of public money being spent without proper accountability.”

“It should be breathtaking to read the Executive Office does not hold a clear audit trail regarding how the money was awarded, but sadly it is simply not surprising to anyone who tried to warn the project was flawed from the beginning,” he said.

“Serious questions must be answered by them.

“External experts must now be brought in to oversee implementation of the Audit Office recommendations and to ensure nothing like this is allowed to happen again.

“The urgency of this is even more important given civil servants are being handed more power in the absence of an Executive by the Secretary of State.”

TUV leader Jim Allister said: “I have no doubt that there have been worthy projects funded through the SIF but it is clear that the people of Northern Ireland should be angry that their money was squandered in this fashion on a fund which was flawed from the outset and which many people warned about.

“This is yet another scandal made in Stormont and once again the taxpayer has been left with the hefty price tag.” –PA