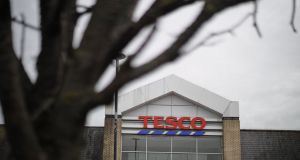 Concerns that big British businesses such as Tesco will be deterred from trading in Northern Ireland after Brexit have been raised in the House of Lords. Photograph: Tolga Akmen/AFP/Getty

Concerns that big British businesses such as Tesco will be deterred from trading in Northern Ireland after Brexit have been raised in the House of Lords.

Lord Kerr, the architect of article 50 which enabled the UK to exit the EU, has warned that the special arrangements put in place to avoid a border on the island of Ireland may be a fatal trade barrier for some companies.

Under the Northern Ireland protocol, all businesses sending goods to the region from Great Britain will have to make formal declarations for the first time, with food sellers such as supermarkets subject to separate checks on chilled and fresh food from January.

Just three weeks ago the first details of the new trading conditions across the Irish Sea emerged, with businesses obliged to complete three rounds of customs, security and transit forms on all goods being transported to Northern Ireland.

Mr Walker said the government intended the new system to be “light touch” and streamlined.

However, he faced further questions about the government’s preparedness with Lord Teverson questioning whether the new IT system, the Goods Vehicle Movement System, would be tested in time.

Lord Lamont argued there was a clear conflict in the Brexit protocol between article 5, which demands Northern Ireland businesses complete exit summary declarations for all goods being transported to the rest of the UK, and article 6, which promises “unfettered access”.

“That is a rather awkward thing,” he told Mr Walker as he defended the government position, saying it was within the UK’s gift to ensure unfettered access.

Mr Walker conceded that some of the detail of the protocol had yet to be agreed by the joint committee chaired by Michael Gove and the vice-president of the European Commission, Maroš Šefcovic.

He also said details on the Northern Ireland border operating model, expected yesterday, would be published in the “coming weeks”. - Guardian

1 Irish in Canary Islands: Life has changed dramatically
2 Funeral of John Hume hears peacemaker ‘gave dignity and life to so many people’
3 Fresh investigation into the murder of Michaela McAreavey in Mauritius
4 NPHET calls for ban on non-essential travel from countries with high Covid-19 rates
5 Donohoe does not commit to specific compensation for pubs
Real news has value SUBSCRIBE