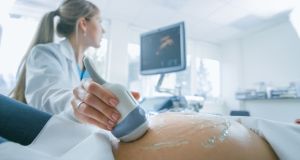 Hundreds of emails and letters from distressed and angry women and their partners were sent to the Government. Photograph: iStock

The HSE has bowed to a campaign to reverse its prohibition on partners of pregnant women attending maternity hospitals for 20-week scans and surgical interventions.

The measure was introduced as a Covid-19 precaution in hospitals but has led to a huge backlash from couples using maternity services, some of whom have described the ban as inhumane, cruel and heart-breaking.

Hundreds of emails and letters from distressed and angry women and their partners to the Government have been released to Aontú leader Peadar Tóibín who has described their content as “harrowing” and deeply distressing.

“It is clear now that the restrictions around maternity services are inhumane and disproportionate,” he said.

“We must remember that one in four pregnancies end in miscarriage in this country. No woman should be left to face this bad news alone, in a hospital corridor without a partner to support her.”

The correspondence indicates the level of anxiety and frustration at the decision not to allow partners into the 19 maternity facilities in the State, particularly for the anomaly scan. Partners are allowed in for births but not for scans or emergency procedures. Some 172 people wrote to the Minister for Health Stephen Donnelly and Taoiseach Micheál Martin during six weeks in the autumn, and hundreds more since then. A petition organised against the restrictions by campaign group, Uplift, has gathered 52,000 signatures.

The HSE is expected to ask maternity facilities on Wednesday to allow partners visit for anomaly scans if possible. The new advice is understood to have stemmed from lower rates of transmission in the community, as well as listening to the views of patients and clinicians.

One woman who experienced a miscarriage wrote to Mr Donnelly in September asking why it was acceptable for six people to socialise while partners were not allowed in maternity hospitals.

“I had to sit in a room alone to be told my baby had died. I was sent from this room alone reeling from what I had just heard and [LEFT TO)]sit on a busy ward corridor sobbing alone.

“This is simply unacceptable. At no point was I allowed to have my husband present to provide any sort of comfort. I sat for hours alone and broken in one of your maternity hospitals. Not a single person to offer me the comfort I craved and needed.”

Another woman wrote: “I am currently on my second pregnancy. My first pregnancy ended in a miscarriage which I’m sure I don’t have to tell you was a very stressful and traumatic experience. Thankfully I had the support of my partner and my mother when I found out this awful news. Without that support, I don’t know how I would have coped. Now, my heart breaks for anyone who has had to hear those words alone due to the restrictions.”

“I could not imagine what it would have been like going for my first scan without my husband when the monitor turned dark and the midwife told me there was no heartbeat.

“It is an unexpected and earth-shattering experience that no woman should have to go through alone and it is a scandal of our time that women are being forced to endure this.”

A woman, writing to the Taoiseach, spoke of living through a global pandemic while pregnant.

“I attended all of the scans on my own. I attended appointments on my own. Antenatal classes were cancelled. Social interactions with other first-time mothers just wasn’t possible…I was admitted to hospital for one night at 31 weeks.

“I had high blood pressure and was experiencing dizzy spell. My husband was so worried but all he could do was simply leave me to the hospital door. I felt so weak and scared trying to find my way around the hospital. I had to be practical and keep thinking I need to be strong for our baby.”