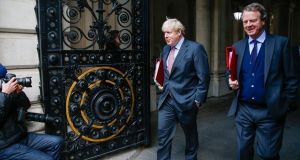 Boris Johnson will travel to Brussels on Wednesday to try to reach a breakthrough on a post-Brexit trade deal over dinner with European Commission president Ursula von der Leyen.

It comes after the British government announced it would pull controversial clauses of legislation after an agreement was reached with the EU on how to implement arrangements for Northern Ireland, in a move that could help unlock a trade deal .

Taoiseach Micheal Martin on Tuesday warned “we are facing the possibility of a no deal Brexit”.

But both sides set the stage for a potentially make-or-break meal in Belgium on Wednesday.

In a statement, Downing Street said: “The PM will travel to Brussels tomorrow for dinner with VDL to continue discussions on the future relationship between the UK and the EU.”

Ms von der Leyen said that “I look forward” to welcoming Mr Johnson on Wednesday evening, adding: “We will continue our discussion on the Partnership Agreement.”

No 10 hopes the dinner could pave the way for talks between negotiators Mr Barnier and his Downing Street counterpart Lord Frost to resume, but there were warnings there would not be a compromise on sovereignty.

Speaking on RTE’s Prime Time, Mr Coveney said while no time limit could be placed on the protracted talks, Wednesday would prove “pivotal”.

Although he welcomed the breakthrough on arrangements for Northern Ireland on Tuesday he said those involved in trade talks had become more pessimistic throughout the week.

On Tuesday the two sides declared they had reached agreement on how to practially implement arrangements for Northern Ireland designed to avoid a hard border on the island of Ireland and signed last year.

The contested clauses of the Internal Markets Bill that would have overridden aspects of the Withdrawal Agreement agreed last year are to be scrapped, and no similar clauses will be introduced in a new Taxation Bill, London announced.

“Following intensive and constructive work over the past weeks by the EU and the UK, the two co-chairs can now announce their agreement in principle on all issues, in particular with regard to the protocol on Ireland and Northern Ireland,” the two sides said in a statement.

Both sides declared they had reached agreement on “all issues” regarding how to practically implement arrangements for Northern Ireland designed to avoid a hard border on the island of Ireland and signed last year.

“This is I think progress, and positives have been difficult to find in recent days when it comes to Brexit negotiations,” Mr Coveney said.

“But this is most certainly an important positive for the island of Ireland as a whole, because what this does now is it provides the guarantees that Ireland’s place in the single market and the issues around the border are now all settled in terms of implementation”

“I think that is something worth recognising, and hopefully this is a signal that the British government is in a deal making mood and we can now carry some momentum from this around the future relationship discussions and hopefully a trade agreement that may or may not be possible in the next few days.”

US Democratic congressman Richard Neal, who warned about risks from Brexit to the Northern Ireland peace process, welcomed the agreement from the EU-UK joint committee.

The chairman of the House of Representatives ways and means committee, which signs off on US trade deals, has encouraged the EU and the UK “to continue to work together on a deal which would be beneficial to all including the people and businesses on the island of Ireland.”

The progress was unlocked in a meeting on Monday between British cabinet minister Michael Gove and the European Commission’s Maros Sefcovic, the two chairs of the joint committee set up to implement the Withdrawal Agreement.

European leaders expressed hope that the development would inject positive momentum to stalled talks on a free trade agreemen.

“We are still very far apart and we are not hiding this from anyone,” Commission Vice President Sefcovic told journalists.

“We removed one big obstacle from the way, and I hope we will see positive results also coming from this very complex negotiation, even though we are fully aware how complicated and demanding this process is.”

He added that the Commission would continue to monitor the situation to ensure that the agreement to withdraw the clauses was fully followed through.

German Europe Minister Michael Roth said it “remains totally uncertain” whether the meeting between Johnson and von der Leyen would be enough to unlock a deal. “We want an agreement but not at any price,” he told journalists.

The EU had warned that it would not be possible to sign a trade deal if Britain was simultaneously backtracking on the agreement reached last year, and the move is seen as a positive development towards an accord.

As TDs called for a debate on the preparedness for Brexit the Taoiseach told the Dail “unfortunately we are now facing the possibility of a no deal Brexit”. Mr Martin said “the situation where we are now is very serious. This isn’t about choreography”

He told Social Democrats TD Cian O’Callaghan and Independent Mattie McGrath who called for a debate that “we have to alert the House to the fact that we could be very well discussing preparations for a no deal Brexit. The situation is very serious.”

He said that even if there is a deal they were still facing significant disruption. He said there were 1.5 million customs declarations a year and this would rise to 20 million a year.