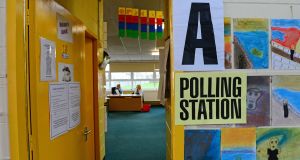 Saturday voting was described as “dead in the water” after the Children’s Referendum recorded one of the worst turnouts in Irish history (33 per cent). Photograph: Eric Luke

The 1918 general election, which radically transformed the Irish political landscape and led to the establishment of the First Dáil in 1919, was held on Saturday, December 14th. Leo Varadkar earlier last week surprised the country when he announced that, rather than hold the upcoming general election on the traditional Friday, the 33rd Dáil will be elected on Saturday February 8th – the first time an Irish general election has been calendared on a rest day since 1918.

The Taoiseach explained that he chose a Saturday date to ease the pressure on working families if schools are closed to be used as polling stations. He also suggested that a Saturday poll would better facilitate third level students to engage with the electoral process, and many youth organisation and party youth wings have long made a similar case. The Taoiseach, then a cabinet minister, publicly advocated for Saturday voting back in 2012.

In deciding to call a general election for a rest day, our government has brought us in line with many jurisdictions across the EU28 where going to the polls over the weekend is normal, including France, Germany, Belgium, Portugal and Spain, but it is more common for continental Europeans to vote on a Sunday. In the Czech Republic, general elections are held over two days (Friday and Saturday).

Although “weekend voting” is regularly put forward by electoral reform campaigners as a method for increasing voter participation, there is little evidence to predict the impact on turnout , if any, of electing the 33rd Dáil on a Saturday. Global research that examines whether weekday or weekend voting influences turnout shows mixed results.

The cases of Ireland’s very limited experience with Saturday voting to date, which includes the second Nice Referendum in 2002, the Children’s Referendum in 2012 and a Tipperary South byelection in 2001, did not enhance voter turnout. Indeed, Saturday voting was described as “dead in the water” after the Children’s Referendum recorded one of the worst turnouts in Irish history (33 per cent) and it made little difference to turnout in Tipperary South in 2001 when compared to another byelection in the same constituency a year previously, held on a Thursday.

It is important to note that all of these contests were “second order” elections where turnout is generally lower than national elections – and the referendums were both stand-alone, acting to suppress voter engagement with the issues. Research on electoral behaviour in the 2012 Children’s Referendum, drawing on polling data commissioned by the Referendum Commission, illustrates that Saturday voting had no influence on the decision of 69 per cent of voters to participate in that referendum.

Ultimately, a general election will provide a better test of the impact on weekend voting on turnout. Ireland has experienced some of the lowest average voter turnout trends across western Europe in recent decades.

Much more action is required on the part of government to advance voter participation and citizenship rights, particularly for the most disenfranchised

A large body of research in political science and geography advises that voter turnout levels are influenced by a myriad of individual and structural factors, including age (but not gender), social deprivation, educational attainment, urban/semi-urban/rural residency, housing tenure, workplace location, distance from the polling station, the type of election or referendum, political interest or apathy, party and candidate choice, campaign mobilisation and even marital status.

Therefore, the day of the week when an election is held is only one variable among many in the complex scientific model of trying to understand and predict electoral behaviour.

Saturday voting is highly unlikely to be a panacea for turnout and we need to manage our expectations with regards to its impact (importantly, the “teatime rush” that sees turnout rise in the evenings as voters cast their ballots after work will be largely removed by weekend voting), but any measure that attempts to narrow observed inequities in electoral participation, even by a small degree, is worth pursuing.

However, much more action is required on the part of government to advance voter participation and citizenship rights, particularly for the most disenfranchised groups in society.

This includes a modernisation of the registration process for the electoral register and, importantly, the timing rules governing this.

Additionally, the next government should prioritise the establishment of an electoral commission on a statutory basis, which would play a key role in monitoring the entire breath of the electoral process for transparency and fairness.

Saturday voting is a start, but it is only that.

1 Steve Coogan: ‘Come Out, Ye Black and Tans is two fingers to the British’
2 Pat Leahy: Fianna Fáil and Fine Gael will not crawl off and leave McDonald the stage
3 Anti-Irish bigotry in Britain has not gone away
4 Paul Flynn: How to cook the perfect chowder – don’t use flour and keep it simple
5 Parties to continue talks with Sinn Féin despite Drew Harris’s IRA comments
Real news has value SUBSCRIBE