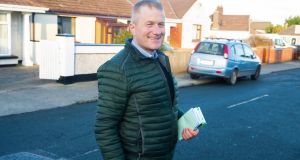 Fianna Fáil has said it has spoken to a Waterford general election candidate over his “failure to make the party aware” of issues surrounding the liquidation of a company owned by him and his wife.

The Irish Times reported on Monday that councillor Eddie Mulligan was disqualified by the High Court in 2017 from acting as a company director for seven years because of his management of a family hair salon business.

Mr Mulligan was a director and shareholder of Hype Hair Salon Ltd, which owed Revenue €153,770.72 when it was placed in liquidation in 2014.

Mr Mulligan and his wife Dervla, who were equal owners of the business and the company’s sole directors, are now disqualified from operating as company directors until 2024.

A Fianna Fáil spokesperson said on Monday evening: “Following The Irish Times’ reporting, we sought and have now received an explanation from Cllr Mulligan detailing the circumstances leading up to the failure of his business and the action taken by the ODCE [Office of the Director of Corporate Enforcement].

“He has also offered an explanation for his failure to make the party aware of the ODCE process during his extensive pre-election interview process. The party will consider this explanation as it decides on the most appropriate response.”

Earlier Mr Mulligan’s running mate in the constituency, Mary Butler TD, told The Irish Times there was an “onus” on all of Fianna Fáil’s general election candidates to notify the party about any financial difficulties.

“I fully sympathise with Eddie’s predicament on a human level – you couldn’t but feel sympathy for him. So many people lost their jobs, their homes, even their lives in the recession.

“But there is a responsibility on any candidate in Fianna Fáil to inform our party headquarters about any financial issues when representing the party at a national level. And unfortunately Eddie didn’t do that.”

Ms Butler would not categorically state if she would be asking voters to continue their preference for Mr Mulligan when casting their ballot. “At the moment until I hear different we’ll be trying to maximise the vote.”

She said any decision on Mr Mulligan’s future would be taken by the party’s general secretary and its national constituencies committee.

Details of the hair salon group’s management were cited in the 2017 annual report of the ODCE. The report said the business, set up in 2005, was insolvent from when it began trading.

It also shows that when Hype Hair Salon Ltd was placed in liquidation its business was taken over by a “phoenix company”.

Phoenix companies often arise out of the ashes of a collapsed business, usually with the debts accumulated under the former corporate owner being left behind.

No further details are given in the ODCE report, and the alleged phoenix company was not named.

An examination of documents in the Companies Registration Office shows that one of the five salons that formed part of the Mulligans’ business is now run by a company with which Mr Mulligan had a connection at the time his salon group collapsed.

Hype Hair Salon Ltd was incorporated in 2005 and was placed into liquidation in December 2014.

Filed accounts for a different company, which had been in existence since 2011, indicate it started trading around the time Hype Hair Salon was being wound up. The Mulligans are not shareholders or directors of this company.

However, in this company’s accounts for its 2015 financial year its business address is given as “c/o Eddie Mulligan” at his family home in Knockboy, Waterford.

These 2015 accounts cover a 13-month period to the end of that calendar year. In other words the period covered by the accounts begins on the same month that Hype Hair Salon was being put into liquidation.

In September 2015, the registered office of the company moved from a business park, where it had shared an office with Hype Hair Salon Ltd, to the address in Waterford where the salon still operates.

From 2016 on this address was also given as the company’s business address. Mr Mulligan’s name only appears in the 2015 accounts.

The name of the salon has never changed. The ownership of the salon’s business name, which was registered by Hype Hair Salon in 2008, was never shifted to a new owner, according to the Companies Registration Office.

The most recent accounts for the company that now runs the salon are for the year to the end of 2018, when it recorded a loss of €6,217. It had net liabilities at that stage of €3,485.

* Mr Mulligan told The Irish Times that neither he nor his wife, who works in the salon as a stylist, have been involved in the direction of the business since the liquidation of their former company. He said references to himself and his wife on a website linked to the salon were there as the website had not been updated since his company collapsed.

The reason his home address appeared on the 2015 accounts of the company that now runs the salon, Mr Mulligan said, was because one of its directors was abroad that year, and the accounts for the company were “sent to my house for collection”.

The director, who is well-known to Mr Mulligan, returned to Ireland and the arrangement then lapsed, he said.

* This report was amended on January 21st, 2020 to include a response from Mr Mulligan

HSE audit finds problem with departing staff paying for Cycle-to-Work scheme 15:10
UCD to introduce class on how bystanders can intervene in harassment 15:02
Judge has ‘great sympathy’ for man set to lose his Co Louth home 14:49
Dublin man may have been stabbed to death by woman in parking space row 14:42
‘I think she is terrified’: Woman facing deportation to Nigeria from Sligo 14:29