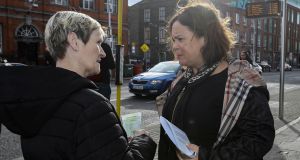 Mary Lou McDonald is the only near certainty for election in Dublin Central, which for decades was staunch Bertie Ahern and Tony Gregory territory.

The question is, given the bounce for Sinn Féin in the opinion polls, could the party have taken two seats in the constituency had McDonald a running mate.

Last time out in 2016, the party leader soaked up almost one-quarter of all the first-preference votes cast.

But spooked by a drop in support in the presidential, European and local elections, party strategists decided this general election would be about consolidating what they held rather than seeking gains.

There was never any serious consideration of a second Sinn Féin candidate in McDonald’s heartland. Séamus McGrattan, the party’s leader on Dublin City Council, has polled well in the local elections since first being co-opted on to the council in 2008 to represent the Cabra/Finglas ward. But he says he’s happy focusing on politics at local level for now.

Behind McDonald in the last general election – by a decent enough margin – was Minister for Finance Paschal Donohoe. It would be a huge shock if the high-profile Fine Gael frontbencher did not retain his seat this time around.

But he would need to be careful about splitting his vote with a new running mate – former manager of the Together for Yes campaign Deirdre Duffy, who is ambitious in looking to pick up a second seat for the party.

Dublin Central has switched between a three-seater and four-seater constituency over previous polls, and it’s back to four TDs for the next Dáil. The big question is who will take the other two seats, assuming no huge upsets for McDonald and Donohoe.

The constituency is diverse. It covers the capital’s north inner city and stretches out into the suburbs of Cabra, Phibsborough and Glasnevin.

For 27 years before his death in 2009, Gregory was a prominent working-class voice of the north inner city, campaigning for better housing and against the drugs problem afflicting the area.

Independent Maureen O’Sullivan ran as the “Gregory candidate” after his death, effectively taking over his seat for 10½ years. Her decision not to stand for re-election, along with an extra seat up for grabs, opens up the race significantly.

Fianna Fáil will be hoping Mary Fitzpatrick can make a breakthrough for the party in the constituency, once closely associated with its former party leader and ex-taoiseach Ahern. The Dublin City councillor polled better on first preferences than O’Sullivan in 2016, but O’Sullivan eventually retained her seat on transfers.

Two others to watch here also took more first preferences than O’Sullivan last time around: Garry Gannon of the Social Democrats and Labour’s Joe Costello. Both are centre left and there is a sizeable left vote in the constituency.

Both should also prove more transfer-friendly than some of the other candidates vying for that ground. It could be a question of who has the edge between them for one of the seats.

Gannon is younger and has been effective at building a profile for himself. Costello, a former minister of State, has experience as a veteran of election campaigns and previously represented the constituency, but lost his seat during the Labour rout four years ago.

Former lord mayor of Dublin Christy Burke, an Independent, has run unsuccessfully for election in Dublin Central over several general elections, although he polled better than both Gannon and Costello on the first count in 2016.

The Green Party’s Neasa Hourigan would need to massively improve on the party’s performance last time out if she was to become its first TD for the area.