‘Vast majority’ related to individuals leaving permanently rather than holidaymakers 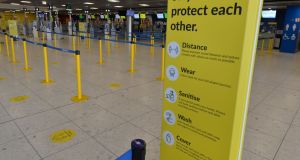 Taoiseach Micheál Martin has said there should be a review of the case of welfare recipients whose pandemic unemployment payment (PUP) was stopped because of overseas travel and who were unaware of the rules about going abroad.

He also said that more than 2,000 pandemic unemployment payment claims have been closed as a result of checks carried out at Dublin Airport. Mr Martin told the Dáil that “ the vast majority of these cases related to individuals leaving the country permanently rather than holidaymakers”.

“These people no longer live here and are not entitled to this payment so it has been stopped. Most people would say that this must be checked on an ongoing basis. It is also important that this type of thing be dealt with in respect of schemes more widely.”

He said that since July 7th 104 Pup and 44 jobseeker payments had been stopped. He said in the Dáil that “I wouldn’t be out to in any way undermine any individual or take from them their legitimate entitlements” and fair play should apply.

Sinn Féin leader Mary Lou McDonald accused the Government of “blatant discrimination” against one section of society for travelling overseas and called for regulations on the issue to be rescinded.

She said they were choosing those who had lost their jobs to be punished for travelling abroad and this is “yet another episode in an unfolding farce”.

There has been growing controversy over the stopping of the PUP following airport checks. A further 44 had benefits such as jobseeker’s allowance cut off for travelling abroad.

The Department of Social Protection has said the vast majority of those whose payment was cut where leaving the State permanently. A recipient must be living in the State in order to receive the PUP and cannot be absent from the State. Neither is the payment paid to individuals during a 14-day quarantine period.

Mr Martin told Ms McDonald that “in the case of individuals who may not have been aware of this, genuine recipients, I would like their cases reviewed. That’s something I would like to do.”

The Taoiseach said the Sinn Féin leader was attempting to create a picture that the State was “adopting a punitive approach” and he insisted that was not the situation because the Government was supporting hundreds of thousands of people through the pandemic payment.

The Sinn Féin leader said the Government was target unemployed people who may have booked a holiday abroad months ago and who would not qualify for State supports to holiday in Ireland.

Calling for the decision to be reversed she claimed the regulation had been incorporated into social welfare guidance early on Monday morning, just 24 hours after the Tánaiste had “set out his position” on travelling abroad.

Mr Martin said however that the statutory instrument or regulation on welfare recipients travelling abroad had been signed on July 10th.

He stressed that the payment was aimed purely at social protection and not for those “who are leaving the country for good and still claiming” the benefit. They had to ensure “proper compliance in relation to the wider taxpayer”.

He said the Department of Social Protection had been saying this “in response to numerous questions” but it had not got any attention until the Business Post reported on Sunday that payments had been stopped.

She also questioned the Taoiseach on claims by the Tánaiste that it got information from the airport even though the Dublin Airport Authority categorically denied this.

Mr Martin said the Department of Social Protection had been carrying out airport checks since 2012 to ensure proper compliance.

But the House rejected by 76 to 55 a vote called by Rise TD Paul Murphy to change Dáil business to debate his motion to rescind regulations on overseas travel.

Independent inquiry to examine mother and baby homes in North 15:26
Man (55) charged over theft of cash from church collection boxes 14:20
Zero-Covid strategy could ‘save the summer’, People Before Profit says 14:14
Men alleged to have published photos of teenage killers seek to halt Circuit Court trial 13:49
Level 5 extended until March 5th while officials consider ban on all non-essential travel into State 15:35