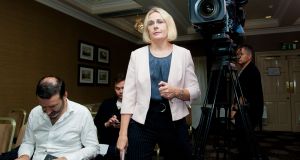 The Olympic Council of Ireland (OCI) is locked into a contract with ticket distributors THG until 2026 after an agreement was reached between the company and former OCI president Pat Hickey.

The organising committee for the next games, the 2018 Winter Olympics in PyeongChang, South Korea, has already withdrawn permission for THG to sell tickets for Ireland for those games, saying it had become aware of allegations that THG was involved in the attempted illegal resale of tickets in Rio.

The news came as a report into the 2016 Rio Olympics ticket touting controversy by Mr Justice Carroll Moran was published yesterday. It strongly criticised the relationship between Mr Hickey and THG, a sports hospitality firm.

Mr Moran found the deals struck between the two prioritised their commercial interests over the athletes, their friends, relatives and supporters when it came to access to tickets.

His successor as OCI president Sarah Keane confirmed Mr Hickey had signed a contract that allowed THG to act as the official OCI ticket agent for the Summer and Winter Olympic Games in 2018, 2020, 2022, 2024 and 2026.

“This obviously presents the council quite a challenge going forward,” Ms Keane said of the contract, adding that the OCI would like to get out of the deal with THG but that she believes it is “pretty watertight”.

The agreement was not brought before the executive committee for discussion at the time and members only became aware of it in recent weeks and it is understood there is a significant financial element to the deal.

Mr Justice Moran said Mr Hickey and the owner of THG, Marcus Evans, had a long-standing relationship which served to financially benefit them both.

The report was ordered by Minister for Transport, Tourism and Sport Shane Ross after Mr Hickey was arrested and charged with alleged ticket touting and other offences in Brazil almost a year ago. The events prompted his resignation as OCI president after 27 years.

In a statement, Mr Hickey claimed the report cleared him of allegations of criminality and financial impropriety. The former OCI president maintained his innocence and insisted he would be cleared of all wrongdoing.

Mr Hickey, who is back in Ireland but awaiting trial in Brazil, said the inquiry contained a number of significant inaccuracies but he could not detail them at this present time.

He said he had “at all times I acted in the best interests of the Olympic Council of Ireland with a view to maximising revenue” for it. He also said he was confident his name would be cleared and he was looking forward to resume his international Olympic duties.

Mr Justice Moran’s report found $1.6 million was paid by Pro10 and THG to become official ticket distributors for Ireland’s tickets at the Olympic games. Tickets allocated for families and friends of athletes were given to Pro10 for re-sale, a move that the judge said breached Olympics regulations.

Pro10 declined to comment on the findings, while THG insisted it acted lawfully at all times.

The judge’s report was published in full yesterday but Mr Moran concluded his work was hampered by the failure of a number of people to co-operate.

Members of the Oireachtas Committee on Transport have called on Mr Hickey to accept an invitation to appear before them on Thursday to give evidence about the Rio controversy.

Fianna Fáil TD Robert Troy said the former OCI president now had the opportunity to give his side of the story. Mr Ross, Ms Keane, Sports Ireland chief executive John Treacy, and Kieran Mulvey of Sport Ireland have also been invited.

The Irish Times understands Mr Hickey is to write to the committee to decline their invitation. Solicitors for Mr Hickey believe the Oireachtas is denying their client his constitutional right to a fair trial and due process by their request.