Advocacy groups to be excluded from eighth amendment hearings 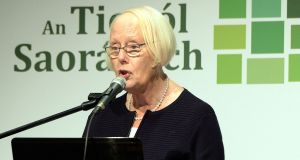 Ms Justice Mary Laffoy, chairwoman of the Citizens’ Assembly, will be the first witness at the Oireachtas committee’s public hearings. Photograph: Eric Luke

The Oireachtas committee examining the eighth amendment of the Constitution will not accept any submissions unless they have been requested by members.

A 21-member committee is assessing whether a referendum to repeal the amendment, which places the life of the mother on an equal footing with that of the unborn child, should be held.

Chair of the committee Senator Catherine Noone said members had agreed their work schedule with a view to publishing a final report by the end of the year.

Advocacy groups on the anti-abortion or pro-choice side will not be invited to appear before the committee.

Instead the public hearings will focus on the evidence of experts, and their first witness on September 27th will be chairwoman of the Citizen’s Assembly Ms Justice Mary Laffoy.

Ms Noone told The Irish Times members were conscious not to repeat the work of that body and would therefore focus solely on its recommendations.

The Fine Gael Senator said there was no desire to exclude anyone from the process but they had a tight timeline to work towards.

Ms Noone said: “We are not taking submissions from anyone uninvited. It would be huge duplication and the committee has agreed that.

“In exceptional circumstances this may be reviewed but we are conscious of the task we have been given.”

The Programme for Partnership Government mandates the committee to examine the recommendations of the Citizens’ Assembly and make its own proposals within three months.

The assembly, chaired by Ms Justice Laffoy, voted in favour of abortion in a wide range of circumstances.

The committee will consider each individual recommendation of the assembly and the Constitutional implications of its proposals before voting on whether to accept them.

It will then hear evidence from experts selected by the committee members in respect of retaining, repealing or replacing Article 40.3.3 of the Constitution.

The committee will then be asked to assess the reasons for which termination of pregnancy should be lawful in Ireland, as well as any gestational limits that should apply.

Ms Noone is to meet the committee secretariat this week with a view to having a private meeting of members on September 20th. Public hearings will follow and Ms Justice Laffoy will be the first witness.