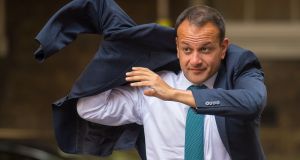 “Leo feels at home in this territory – where he speaks above the heads of politicians in the Dáil chamber and directly to middle Ireland.” Photograph: DominicWire

It is one of those medical procedures people don’t like to talk about. But last year, the Government secretly gave the green light for it to go ahead in Irish hospitals.

It’s called a consultantoscopy and it involves monitoring all the movements of top medics using the latest equipment. This examination can go on for a protracted period, although the patient is not conscious at the time that it is happening.

But the after-effects can be most unpleasant.

The Taoiseach is all for it, though. And he is a qualified doctor.

Consultantoscopies are the way forward, and Leo Varadkar told the Dáil in no uncertain terms on Tuesday that this is his deeply held political opinion. As he sees it, hospital consultants contracted by the State to look after public patients should be placed under observation if they start pursuing pay claims while displaying strong symptoms of going private.

You could gather this from his robust response to questions from the Fianna Fáil leader about hospital consultants being investigated by detectives hired to establish whether they were neglecting their public obligations if favour of lucrative private work.

Micheál Martin said it was “a sinister and dangerous precedent” to have public employees under surveillance by the State.

“Who’s next?” he asked. ESB workers, bus drivers, train drivers? Anybody putting in a pay claim? And then, said Micheál, there are questions relating to data protection, invasion of privacy and possible breaches of patient confidentially.

Did the Government or specific Ministers know about this strategy to spy on hospital consultants? What sort of contract was signed with private investigators? What guidelines and protocols were they given on how to behave while carrying out surveillance on doctors? How were they able “to check as to whether on-site activity is public or private without potentially breaching the files?”

But the thing is, Micheál wasn’t asking about ESB workers or train drivers being spied upon by Big Brother. He was asking about hospital consultants, who aren’t doing too badly on the remuneration front and who might reasonably be expected to turn up and do the public work they have been contracted and paid to do.

Although the Fianna Fáil leader posed some valid questions, the Taoiseach knew he was on solid ground when stoutly defending decisions by the departments of health and finance to stick private eyes on the cases of greedy consultants.

“This, in my view, is not an unprecedented action,” he declared, listing some examples.

Welfare officers check to see “that people are actually genuinely disabled” if they are getting disability or invalidity benefit. Investigators check to make sure people are not claiming welfare while working in the black economy. Tax inspectors “check up on people in all walks of society” to make sure they are tax-compliant.

And then the Taoiseach put the fear of God into takeaway owners with the specific example of revenue inspectors “counting the number of chip bags that came out of a chip shop to see how many, whether that person was complying with the law.”

Leo sees the hospital consultants as part of this mix.

“What I can say is a huge number of consultants in the country work very hard and work well beyond the hours they are contracted to do. They deserve our thanks and respect,” he began, before referring to an RTÉ Investigates programme that showed “there are other consultants who breach their contract and who work full-time in private and public practice, which is impossible”.

This is a “serious issue” because these doctors are using State money and time for their own ends “moonlighting in a private hospital when they should be working in a public hospital” and treating people who, in many cases, have been a long, long time on waiting lists.

Leo feels at home in this territory – where he speaks above the heads of politicians and commentators in the Dáil chamber and directly to middle Ireland, that cohort he once famously described as the “people who get up early in the morning”.

So he gave no quarter to Micheál when it came to setting the private eyes on the consultants. In fact, he congratulated RTÉ on exposing the carry-on of some greedy doctors. “I think Prime Time did the country a service.”

Whatever about the legitimate questions raised by Micheál, Leo will know that his taxpaying voters won’t be too put out about any discommoded consultants.

As for what his Cabinet or Ministers did or didn’t know about the use of private investigators to get information ahead of a court case on their pay claim taken by consultants, he had this to say: “I don’t know if there was a legal contract with the PIs. The Cabinet agreed that compliance with the contract should be part of the defence but there was no ministerial involvement in the execution of the strategy.”

Which led a puzzled Timmy Dooley of Fianna Fáil to shake his head and remark: “It’s a Cabinet without Ministers.”

Later on in Leader’s Questions, the subject of Nama came up again. As usual, it was Mick Wallace who introduced it. This time, he wanted to mark the first anniversary of the setting-up of a commission of investigation into the agency’s controversial disposal of its Northern Irish loan portfolio, known as Project Eagle.

The Taoiseach said he was pleased to see Nama was going to break even and possibly have a little surplus of €2 billion-€3 billion.

“It’s lost about €20 billion and you know it,” retorted Wallace, who claimed Mr Justice John Cooke, who is heading the inquiry, is not getting enough co-operation from Nama.

This prompted Leo to muse about the various inquiries going on at the moment and suggest that people shouldn’t jump to conclusions before their work is done.

He said certain TDs raised allegations in the Dáil about issues now under consideration by the Disclosures Tribunal and “we now know from what has emerged in Dublin Castle that those allegations made by deputies were false. And I’ve yet to hear those deputies withdraw those allegations and I think they should do so.”

As the Ceann Comhairle told him his time was up, the Taoiseach concluded: “I will return to that, incidentally.”

Micheál Martin was up like a shot. “On a point of order, is it in order for leaders to comment on a tribunal in the middle of the tribunal’s proceedings?”

Micheál needed a ruling, for future reference, “otherwise we will all come in every day and start commenting on various pieces of evidence given at tribunals”.

Leo told the Ceann Comhairle he’d be happy with a ruling.

“People are constantly commenting on commissions and tribunals. I would be very happy if it was all out of order,” he remarked, retrospectively ruling himself out of order.