Taoiseach to join call for Communicorp to reverse ban on journalists 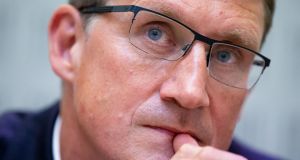 The Taoiseach will join other Dáil parties to write a letter calling on Communicorp to reverse a ban on journalists from The Currency website and The Irish Times from appearing on its radio stations.

Leo Varadkar told Green Party leader Eamon Ryan that he did not agree with journalists being prohibited from radio or TV stations.

In the Dáil on Tuesday, Mr Ryan raised the issue of a ban on some journalists taking part in programmes on Denis O’Brien-owned Communicorp radio stations.

The Taoiseach said “I believe in free speech and I believe in a free press and I don’t believe anyone should be banned from the airwaves, journalist or citizen unless it’s for a very good reason. And those reasons should be somebody inciting hatred.”

He added: “But I don’t think that anyone should be banned from the radio, from TV or from any publication solely based on who their employer is.”

Mr Ryan said the ban was similar to a decision taken two years ago by Communicorp in response to an article by columnist Fintan O’Toole which resulted in Irish Times journalists also being banned.

The Green Party leader said that banning journalists from radio stations “has a very poor effect on our democracy. We need a free press which is open to debate and allows different voices to be heard.”

He added that “whether it’s for commercial reasons or whether it’s an editorial view of a certain owner that they mightn’t like what is written in a paper, to ban journalists from radio stations is not what we want”.

Mr Ryan said that other party leaders and groupings in Leinster House were of the same view and he asked the Taoiseach to join them in writing to Communicorp asking them to reverse their decision.

Mr Varadkar said “I’d be happy to join the deputy in that.”

Business news website, The Currency, began publishing last week. It was founded by journalists Tom Lyons and Ian Kehoe. Among the stations owned by Communicorp are Newstalk,Today FM and Spin.