Phil Hogan ‘honoured’ as he is confirmed EU trade commissioner 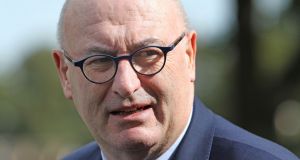 Phil Hogan confirmed his appointment as the EU’s next trade commissioner on Tuesday.

Fine Gael’s Phil Hogan has been confirmed as the European Commission’s next trade commissioner following a grilling by MEPs on Monday.

Mr Hogan, who confirmed his appointment to the high profile position on Tuesday, said he was “honoured” with the move. He is currently the EU agriculture commissioner.

“The EU’s leadership role in global trade has never been more important or faced as many challenges as it does today,” he said on Twitter.

“I therefore look forward to working very closely with MEPs and the European Council. I hope to justify the trust they have placed in me to deliver on our shared agenda.”

The EU’s trade policy must be used to “promote our values. . . especially in areas like climate action, sustainable development, labour rights, standards, and women’s empowerment”, he told MEPs on Monday.

Mr Hogan, who received criticism from Greens and the left, as well as Irish farmers, over the draft Mercosur deal between the EU and four south American countries, will now take the lead in the EU’s next phase of Brexit talks with the UK.