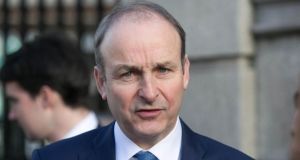 Michaél Martin told the Dáil the ‘really concerning aspect’ of Leo Varadkar’s comments in New York were that he was ‘in sympathy with President Trump in terms of the media’. File photograph: Collins

Taoiseach Leo Varadkar was “quite notorious” as a minister for feeding journalists in Leinster House with gossip the Dáil was told in the ongoing controversy over his remarks about the media at a lunch in New York.

Fianna Fáil leader Micheál Martin cited former taoiseach Enda Kenny on the issue in the wake of Mr Varadkar’s remarks when the issue came up for a second time in the House on Wednesday.

The controversy first arose when the Taoiseach was reported to have said Donald Trump’s criticism of the media was one of the few things he could sympathise with the US president about.

Earlier Mr Varadkar had told the Dáil he profoundly regretted if anyone in the country thought he did not respect the media but he said journalists were not above reproach or beyond criticism.

But when the issue was raised a second time, Mr Martin referred to some of the Taoiseach’s criticisms including that political journalists were more interested in gossip in Leinster House than in the workings of Government.

Mr Martin said “former taoiseach Enda Kenny would have been very interested in hearing that because he considered you quite notorious in feeding the rumour mill in Leinster House on an ongoing basis with journalists”.

The Fianna Fail leader added that the “really concerning aspect” of Mr Varadkar’s comments in New York were that he was “in sympathy with President Trump in terms of the media because President Trump is probably one of the worst examples of a political leader who regularly demonises media”.

He also said Mr Varadkar also condemned print media and said “they were jealous because social media takes their business”, but Mr Martin added that social media had been shown to distort news.

He referred to the Taoiseach’s criticisms of the media and comments that 80 per cent of the media’s treatment of Government was critical “and you had a problem with that and wanted to rebalance it”.

And he asked what was the Taoiseach doing to create greater media plurality.

Mr Varadkar said however that “anyone can distort the news. It’s not just social media”.

The Taoiseach said nobody liked being criticised. “I don’t like it,” he said telling Mr Martin “you’re very sensitive about it in particular when it happens”.

He cited Government efforts to assist media and said they estimated that the cut in Vat to 9 per cent was worth about €100 million to the print industry.

They are bringing in the Broadcasting Act, which will reduce the broadcasting levy on independent companies by up to 50per cent and they announced a new scheme to provide bursaries to young journalists working in local or community radio and the Defamation Act was being reviewed, he said.

“These are all things I don’t think you’d see being done by the US administration.”

Sinn Féin leader Mary Lou McDonald asked if the Taoiseach was “deliberately missing the point” and suggesting that the commentary attributed to him was wrong.

She said Mr Varadkar had not denied the fact that he aligned his views with those of President Trump but was “rather coy” about the detail of which part of his analysis the Taoiseach agreed with.

Mr Varadkar said it was a private lunch and he was not quoted in full.

Media ownership was not a topic that was raised at the lunch, with between 15 and 20 young Irish people.

But he was very aware that Reporters Without Borders had raised concerns that the Independent Group is too powerful in the print media and RTÉ was too dominant in broadcasting and “I am open to suggestions as to how we can solve that”.

Green Party leader Eamon Ryan said if the Taoiseach really wanted a free and fair media “you should help with funding”.

He claimed it was a “do nothing Government” in relation to media, a claim the Taoiseach rejected as he reiterated efforts in relation to Vat and other measures.

But he added that “I’d have concerns about funding media, particularly private sector media. I think it would damage their independence.”