Varadkar says media important but not above criticism 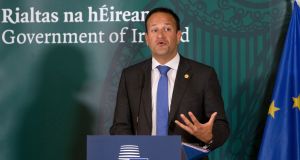 Taoiseach Leo Varadkar said on Wednesday he profoundly regrets if anyone thinks he doesn’t respect the media.

“I profoundly regret if anyone in the country thinks I don’t respect journalism or a free press”, he told the Dáil after controversial comments he made at a private lunch in New York on Tuesday.

Mr Varadkar was responding to Sinn Féin leader Mary Lou McDonald who raised the controversy over the Taoiseach’s remarks at the lunch in which he said Donald Trump’s criticism of the media was one of the few things he could sympathise with the US president about.

Mr Varadkar insisted that he “strongly believed that a free press was important in a democracy” and was as important to democracy as parliament and courts.

Sometimes there are tensions between Government and media, he said, adding that “at the same time it should not consider itself above criticism or beyond reproach”.

Ms McDonald said the Taoiseach had called the event he attended a private lunch but it was “an event paid for by the Irish taxpayer”. She cited Mr Varadkar’s reported remarks that “you were in sympathy with Donald Trump and you believed Irish journalists had no interest in the truth”.

She added that “you have attacked Irish investigative journalism and cited RTÉ in particular.

“You cite programmes that expose scandals” in hospitals, for carers and the failures of the Government to protect those in care.

Ms McDonald said that if the Taoiseach was genuinely concerned about the media “you might have remarked on the issue of media ownership and in particular the power of Denis O’Brien in the media landscape”, and his dominance that had had a chilling effect on journalism.

She claimed that the Taoiseach was not interested in that but “you just wanted to have a go”.

Fianna Fáil leader Micheál Martin also took a swipe at the Taoiseach in a question about homelessness and housing when he repeatedly said the media had very fairly and faithfully reported the Government’s housing announcements.

But defending his remarks, Mr Varadkar said the US event was a “ two-hour lunch with young Irish people living in New York to hear what their thoughts were”.

“I said a lot of positive things about media - I acknowledged the Me Too movement and Harvey Weinstein and exposing him.”

“I also said that I thought I got a fair hearing in general from the media. None of that was reported.”

He added that his only reference to RTÉ was specifically about the Prime Time Investigates programme Mission to Prey when he said false allegations about a priest fathering a child in Africa were made.