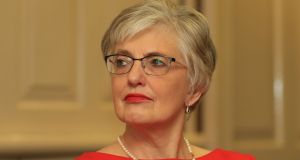 Minister for Children Katherine Zappone has confirmed her support for President Michael D Higgins to serve a second term.

Ms Zapone becomes the sixth Cabinet Minister to back Mr Higgins ahead of an announcement on his future next week.

In a statement, she said: “ It has been an honour to be in a position where I have witnessed the President’s work. I have seen him open up his home to young people, provide a warm welcome to new Ambassadors and advance Ireland’s case for a seat on the Security Council at the United Nations.

“We should all be proud to call Michael D Higgins our President and I will be supporting him for a second term so he can continue serving all Irish people.”

Minister for Transport Shane Ross is also said to be supporting Mr Higgins.

The President is due to announce his intentions next week but it is widely speculated he will seek a second term.

As reported by The Irish Times in recent weeks, he has notified figures in Government and Leinster House of his intention to do so.