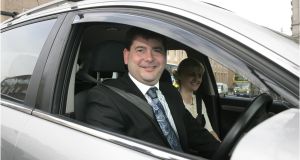 Taoiseach Leo Varadkar has confirmed he had discussions with former minister of State Dara Murphy about referring himself to the Oireachtas Committee on Members’ Interests about claiming Dáil allowances while working full time in Brussels.

“I and my advisers have discussed with former deputy Murphy a number of options as to how an inquiry can be carried out. That’s one of the options that we discussed with him and it is something that is still a work in progress,” said Mr Varadkar.

During sharp exchanges with Fianna Fáil leader Micheál Martin, the Taoiseach reiterated that there should be an inquiry. And he said that Mr Murphy “has already agreed that he will submit to an inquiry and I believe that he should pay back any expenses if that inquiry finds against him”.

The former minister of State for European affairs has been criticised for claiming his full salary, parliamentary and travel allowances despite spending much of the last two years working in Brussels as campaign manager for the European People’s Party (EPP).

Mr Murphy resigned as a Cork North-Central TD on December 3rd soon after helping the Government defeat a no-confidence motion in Minister for Housing Eoghan Murphy. He has since taken up a job as deputy head of cabinet for Bulgarian EU commissioner for Digital Economy and Society Mariya Gabriel.

Mr Varadkar said on Saturday in an RTÉ interview that “we’re going to have to find a way” to investigate the issue.

Three separate Oireachtas bodies could not investigate because Mr Murphy has resigned as a TD.

Mr Martin said that “under section 9.3 and 9.4 of the Ethics in Public office Act, there is a provision where the former deputy could refer himself to the members’ interests committee. Given all you have said over the last while have you actually asked your former colleague to refer himself to the members’ interests committee under that legislation and if not will you so do?”

Mr Martin told the Taoiseach that “he [Mr Murphy] effectively retired two years ago when he accepted a role as campaign manager for the EPP, something you congratulated him on and wished him well”.

Mr Varadkar replied: “I am aware that provision exists and we’ve had some discussions with him about it. I’ll come back to you on that.”

But he then rounded on Mr Martin and asked him to answer whether Fianna Fáil TDs under investigation by the ethics committee “are going to be ratified as FF candidates at the next general election when there is still a cloud sitting over them when they are still under investigation”.

He cited the renewed row over Fianna Fáil TD Lisa Chambers about voting in her party colleague Timmy Dooley’s place seven times in January. To Opposition heckling Mr Varadkar also referred to the ethics committee’s ongoing investigation of Fianna Fáil TD Niall Collins voting for Mr Dooley several times while he was absent from the chamber.

The Taoiseach also referred to the controversy over years’ old tweets by Fianna Fáil Senator Lorraine Clifford-Lee criticising migrants and Travellers. He claimed Senator Clifford-Lee “has still not apologised for some of these comments she made”.

Sinn Féin finance spokesman Pearse Doherty said: “I think unfortunately we’re going to be subject to a lot of this until the general election. I’ve a seven-year-old and a nine-year-old at home and if they behaved the way the two leaders did in this house I would take them into a corner and have a good talking to them.”