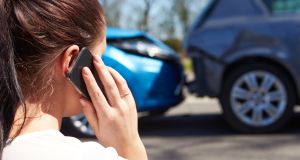 Sinn Féin said motor premiums had increased each year since 2016 even though the number of claims had dropped by 40%. File photograph: Getty

Sinn Féin deputy Dáil leader Pearse Doherty called on the Taoiseach and the Government to “stop swallowing the guff and spin” of the insurance industry, during heated exchanges over the costs of premiums and profits for the sector.

Leo Varadkar rejected the claims and insisted that “I have never been soft on the insurance industry, not in the slightest”.

Mr Varadkar stressed that motor insurance premiums had come down by about 20 per cent since they peaked in 2016 after Fianna Fáil leader Micheál Martin pointed to the findings of the report of that National Claims Information database that insurance costs has risen by 62 per cent over the past five years.

Mr Martin said the Government had failed young people in particular over the huge increase in insurance costs, when profits for the sector were so high.

But Mr Doherty hit out at the Government and Fianna Fáil and said they did not need a report to know that premiums had risen so much.

After the Taoiseach suggested Mr Doherty was accusing him of lying the Donegal TD said “I am accusing the industry of spinning and lying” and the two largest parties of “swallowing their guff”.

The Sinn Féin finance spokesman, who has repeatedly raised the high cost of insurance in the Dáil, said motor premiums had increased each year since 2016 even though the number of claims had dropped by 40 per cent.

He highlighted the difficulties for parents because of the crisis in insurance coverage for creches and the withdrawal of an insurer from the sector.

Mr Doherty said there was now only one insurer in place and many parents did not know if creches would reopen in the new year. He repeatedly claimed that the Government had failed to act on insurance and had “midsiagnosed” the problems in the childcare sector which he described as “completely unregulated”. Mr Doherty called for a Cabinet sub-committee to be immediately established to deal with the crisis in childcare insurance coverage.

He said it was a disjointed sector and “seriously dysfunctional” in the way it is operated because it is overseen by several departments.

Mr Doherty said he understood that it could be “hundreds” of creches that had not re-registered.

He said there was a serious crisis and he said parents expected Government to intervene where there is “serious failure”.

Will creches close in the new year?

The Taoiseach acknowledged that there were a lot of worried parents, concerned that childcare facilities may close or that they might face significant increases in charge.

But he said that the Department of Children was engaged with the issue to ensure that “we don’t see creches closing in the new year”.

He would be meeting Minister for Children Katherine Zappone on Tuesday night to discuss the issue, which had arisen in the past 11 days.

He said a Cabinet sub-committee would not resolve insurance issues but Government action would and “that action is taking place” and the Government had introduced major reforms which were having an effect.

He added that the Judicial Council, the committee of judges who will review the level of awards in insurance claims, the book of quantum, had formally been established on Tuesday.

The Taoiseach added that one of the difficulties with insurance costs had been the lack of transparency and the report of the national claims information database, from the Central Bank, had only happened because of Government action to provide clear data.