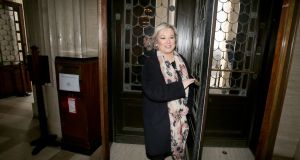 Sinn Féin leader in the North Michelle O’Neill: will be ratified as deputy president at a special ardfheis on February 10th. Photograph: Paul Faith/AFP/Getty

Sinn Féin has confirmed Michelle O’Neill is the sole candidate for the position of deputy president of the party.

Ms O’Neill, who is the party’s leader in the North, will be ratified at a special ardfheis on February 10th.

The party’s chairman Declan Kearney said Ms O’Neill received the requisite number of nominations from across the party.

In a statement, Ms O’Neill said she was honoured to be nominated for the role.

She added: “Sinn Féin wants to be in government North and South to deliver high-quality public services on the basis of equality, rights and prosperity.

“We will continue to work against the twin threats of Brexit across the whole island, and British government austerity in the North.

“Our priority is to continue the growth and development of Sinn Féin as a national political movement for Irish unity and an agreed Ireland. ”

Ms O’Neill will serve as deputy president, while Mary Lou McDonald will be appointed as party president.